The Congress alleges that the movie has controversial content against the former Prime Minister and wants the content to be removed. 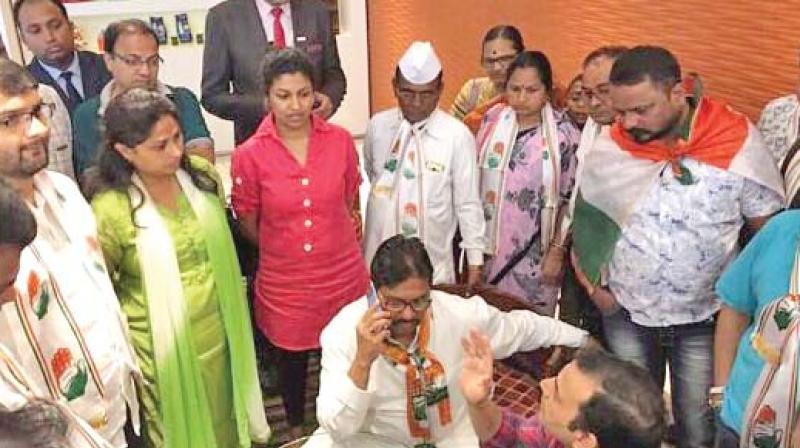 Pune: Congress party workers on Saturday went all out to ensure that film director Madhur Bhandarkar was forced to cancel all three press conferences that were to be held in the city to promote his latest movie, Indu Sarkar. The party workers managed to reach the venues much before the director, all three times and forced him to call off each of his interactions with the media. The film is allegedly based on the life of former Prime Minister Indira Gandhi and the Emergency era. The Congress alleges that the movie has controversial content against the former Prime Minister and wants the content to be removed.

The director’s first press conference to promote the movie was to be held at a hotel at NIBM road.  But Congress workers reached the venue much before him and compelled him to cancel the event. It was the same story at the second programme at Suryadatta Institute in Bavdhan, where he was to be the chief guest. The last stop on the director’s itenary was the Crown Plaza Hotel, near Prune Station, where he had organised an interaction with the media. But city Congress chief and former home minister (state), Ramesh Bagwe was there at the venue with his retinue of party workers to bring all proceedings to a halt. The party’s city spokesperson, Ramesh Iyyer, said, “Indu Sarkar has controversial content and we want Bhandarkar to remove those parts. We have asked him to show us the movie so that we can assure ourselves there is nothing controversial about Indira Gandhi. We are peacefully asking the director to show us the movie. Otherwise, just as we did not allow him to hold his press conferences today, we will not allow his movie to be released in Pune. But he avoided talking to us at all three venues — NIBM Road Hotel, Crown Plaza Hotel and Suryadatta Institute. If there is nothing controversial in the movie, why he is not ready to talk to us?”

He also alleged that that the Bharatiya Janata Party (BJP) government is backing the film as it wants to malign the image of Indira Gandhi on her birth centenary.

He added, “Though our workers were protesting in a peaceful way. The police has arrested more than 60 Congress workers. The Koregoan police station officials have begun to file cases against them.”

Mr Bhadarkar later took to the social media to talk about the incidents. “Congress workers have barged in the hotel lobby and created ruckus”. He also claimed that he and his team were stranded “like hostages” in the hotel room. “Its baffling to see self-proclaimed custodians of #freedomOfExpression creating huge ruckus to prevent a legitimate release of #InduSarkar,” Mr Bhandarkar posted on his Twitter handle and also uploaded pictures of the incident.