Sex workers are starving, would you help them?

Unlike other categories of workers, CSWs have no social support system to turn to 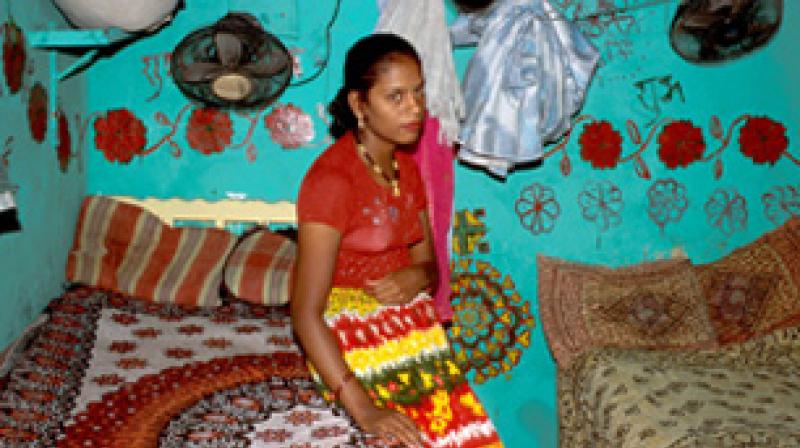 Social workers warn of a spread of HIV if CSWs are forced to abandon safe-sex practices. (Photo: WHO)

Chennai: “I have had no income since the lockdown began and I have no money left. I have absolutely no idea as to how I will survive this,” said Neelavathi.

As coronavirus victim tales go, this narrative is not entirely a unique one. Neelavathi’s trade, like most other trades, has been dealt a mortal blow, rendering her penniless.

But unlike other daily wage earners, who have social support systems, Neelavathi has no one to tell her story to. She’s a commercial sex worker (CSW). Though the problems she mentions are similar to anybody else’s -- no transport, long queues at shops and police chasing her away in the street -- her lack of work is unique. Not only can she not work from home, there’s no place where her clients can reach her.

On a normal day, Neelavathi steps out for work around 10 am and is back home by around 5 pm. She is one of the CSWs engaged to a ‘house’ in Moolakadi, where she is paid Rs 300 for every client she services. At times she may go out with a client to a lodge or a guest house and make Rs 1000 or more. But that happens rarely.

Whatever it is, on an average she used to make Rs 500 per day, which was just enough to feed her two children and her. Since she commutes by bus and autorickshaw, the lockdown has left her immobile, confined to her house.

Besides, she has another worry: She has run out of condoms. As a member of the Red Hills Thai Vizhuthugal Nala Sangam, a community-based organisation (CBO) of CSWs, she’s acutely aware of the need for condoms and regularly visits Red Hills to collect her quota of prophylactics.

The president of Red Hills Thai, Poongodi, said the lockdown came out of the blue. After the coronavirus scare began, at an annual meeting of the collective recently, they had discussed the precautions to be taken against the virus. But the lockdown caught them unawares.

The CBO has about 1300 members, all of them CSWs. Many of the women often turn to Poongodi for help but this time the CBO is not equipped to give them any.

The president of the Namakkal District Thai Vizhuthugal Women’s Trust, Geetanjali, put out a message on her Facebook page on April 4 seeking help for the members of her trust, many of whom were going without food.

She said among her members were women who lived below the poverty line and those afflicted by HIV.

She told Deccan Chronicle that many of her members were having just a single meal a day and had no money for other basic needs. Some of the women were living alone with no family support and their plight was the worst, she said.

The Nammakkal-based CBO has about 1,500 members, living in villages around the town. Geethanjali fears that the coronavirus crisis might lead to a spread of HIV.

How so? She explained that CSWs pushed to the brink are at risk of giving in to sexual demands in lieu of minor financial or material favours in this time of distress and may thus indulge in risky behaviour due to the lackc of a prophylactic.

Agreeing with her, A J Hariharan of the Indian Community Welfare Organisation (ICWO) said CSWs were primarily responsible for containing the spread of HIV in the country in the past. Hariharan, who has been into AIDS/HIV prevention work since the early 1990s, said it was due to the insistence of these women on use of condoms that stopped the HIV infection.

Hariharan said there are 6,300 CSWs in Chennai alone and about 90,000 in the whole of Tamil Nadu. All of them have been hit by the lockdown. Even before the coronavirus, many of them lived in abject poverty. Now the loss of livelihood has affected them so badly they cry on the phone while asking for help.

“We have a stomach to feed,” says Latha, who has never faced a situation like this in her six-year career as a CSW.  She has two children to take care of. Normally she would earn about Rs 1000 a day, serving an average of three clients. She used to work from 11 am to 5.30 pm at a ‘house’ near Moolakadi.

Latha has not stepped out of street in Vyasarapadi since the lockdown began. But she has found an alternative career to make money from her house. She has started making tea and selling it on the street. She makes about Rs 100 a day. “Something is better than nothing,” she says.