The number of passengers who were quarantined between May 8 and July 17 was 12,709 and 11,406 of them had gone home in the districts 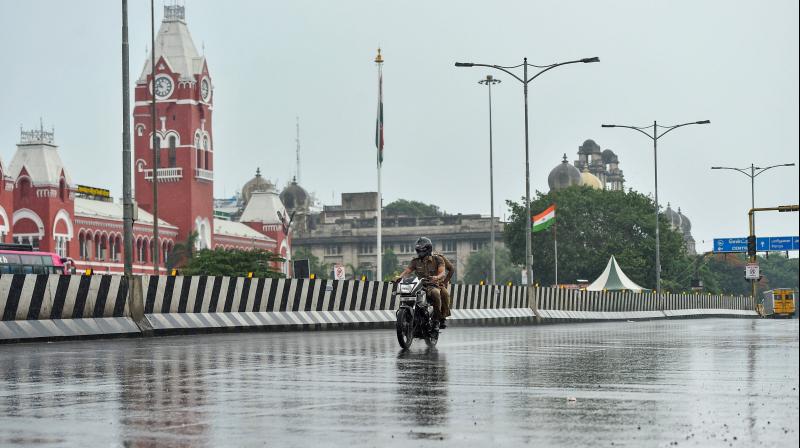 A scooter plies on an empty road during an intensive lockdown imposed to curb spread of covid19 in Chennai, Tamil Nadu. PTI photo

The intensive efforts taken by the government to prevent the spread of Coronavirus in the past three months had brought the infection rate under control, Minister for Tamil Culture K Pandiarajan said on Sunday when the total number of new cases shot to 4979 and deaths to 78.

The second wave of Coronavirus infection was unlikely to happen in Tamil Nadu due to the strategies devised by the government, Pandiarajan said after inspecting Fever Camps in Tondaiaripet area in Chennai.

Chennai was likely to turn into a ‘green zone’ by July 31, after which there was no chance of the lockdown continuing, too, he told newsmen.

However, infections continue to rise in the districts and three MLAs tested positive for Covid-19 on Sunday. They were Sengutuvan of Krishnagiri, Karthikeyan of Vellore and Gandhi of Ranipet.

Meanwhile, Chennai Corporation Commissioner G Prakash said that many preventive steps were taken to stop the spread of the virus. All passengers who landed in Chennai from abroad were quarantined before being allowed to travel to their places.

The remaining 1,303 passengers were still in the hotels and would be allowed to go once their quarantine period was over, Prakash said, adding that of all the passengers, only 381 tested positive and all of them were treated for Covid-19.

In Chennai quarantine of persons who test positive was managed by 3300 Focus volunteers, who ensure that people follow the norms and also help the isolated persons get food, provisions and other essentials.

The volunteers had to see to it that if the brown sticker was put up on the doors, no one in the house should step out and if it is a green sticker only the person concerned should remain quarantined, he said.

Violations of quarantine rules were duly reported to the authorities by the volunteers and action was taken against them, Prakash added.