The deceased have been identified as Asmit Tawade, Shubham Borade and Anant Parekh. 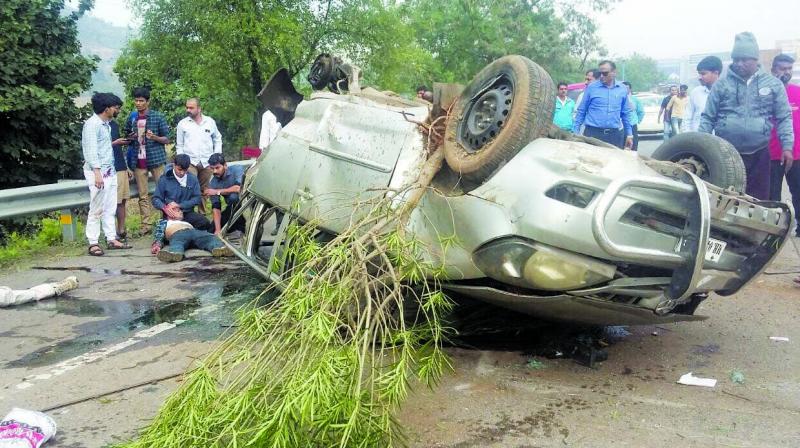 One of the cars in the accident.

Pune: Three died in an accident when two cars collided on the Mumbai Pune Expressway near Khalapur toll naka at 9 am on Wednesday. Four more persons, who were in the car in which the three deceased were travelling, also sustained injuries after the car turned upside down twice and fell down on the opposite road. The accident also affected traffic on the expressway.

The deceased have been identified as Asmit Tawade, Shubham Borade and Anant Parekh. The injured are Shubham Saroj, Mohamed Adil Hrushikesh Sanas and Sohan Shah.

S. B. Thakur, police sub inspector, Khalapur police station, said, “Hrishikesh Sanas, resident of Mumbai, who is injured, has lodged an FIR against the driver Mohamed Adil for causing death of three passengers due to driving at a high speed. As per the complaint, seven people were going to Khopli from Ghatkopar in a Innova (MH04CJ0423) on Mumbai Pune Expressway. Driver who was driving in speed lost his control as tyre of the car got broken and the car got turned upside down twice. The car fell on the lane going toward Mumbai from Pune. And then it hit to another car Ritz (MH12FP1185) that was going towards Mumbai.”

He added, “As soon as the driver gets discharged, we will arrest him under IPC 304 and relevant sections of Motor Vehicle Act.