India has refused to accept the Rohingyas except for the few who came in earlier with UNHCR cards. 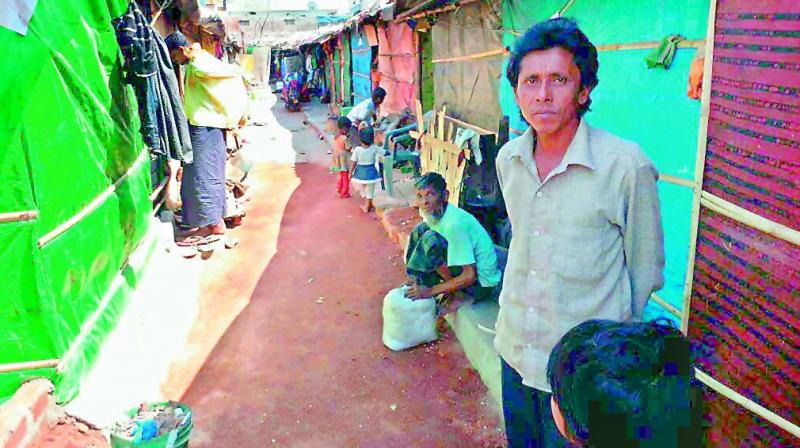 A view of the inhuman conditions insides a Rohingya camp in the city. There are 70 such camps where about 4,000 Rohingyas live. (Photo: P. Surendra)

Hyderabad: Life is a challenge for about 4,000 Rohingyas living in inhuman conditions in the city, even as a case on their deportation is being heard in the Supreme Court. The refugees are settled in about 70 camps in and around Balapur and Chandrayangutta on the city’s outskirts.

The camps, spread across two km, are squalid with few facilities. Affluent people who own land parcels in under-developed localities have rented the land out to the refugees, says Mohammed Hassan, leader of camp number 20 located in Royal Colony in Balapur. “Some Good Samaritans have donated cloth, bamboos and other materials to put up tents. Some others chipped in and set up temporary toilets in the camps.”

Shafeeq Ahmed, a realtor who rented out a 400 yard compound, says that as the refugees have come from  violence-hit areas and have United National Human Right Council (UNHRC) authorisation he provided them shelter.

“Local police have no objection to those having UNHRC cards,” he said.

The men in the camps try and find work wherever they can. Some collect scrap and plastic material from the streets. “We do not get work at the local labour adda every day,” says Saleem, one of the refugees.

Malnourishment amongst the children is high due to poor food. “Voluntary organisations conduct frequent health check-ups and provide free medicine. Nevertheless, the women continue to suffer from several health problems in the absence of good food,” said Abdul Rahim, a local social worker.

These impoverished families have slim chances of honest employment in the absence of any government programme, could well be exploited by terror groups or criminal networks. They have been the victims of terrible violence and discrimination in their own country and now have to battle extreme poverty here, where no provision has been made for taking them in and providing them succour on humanitarian grounds.

“In such a situation they can become fodder for nefarious elements who can easily lure them into any organisation or group and exploit them,” said a police official.

The families live hand-to-mouth, dependent on the goodwill of local businessmen who may give them jobs in hotels and function halls. “Some of our men have set up small businesses on the roadside to earn a living,” said Abdul Mabud, one of the refugees. Clothes, food grains and other necessities are donated by local voluntary organisations. During festivals, people are a little more generous.

These Rohingya refugees are from the Rakhine region in Myanmar and crossed over into India to escape persecution. The bulk of Rohingyas have taken refuge in Bangladesh.  India has refused to accept them except for the few who came in earlier with UNHCR cards. Even these it wants to evict, questioning the validity of the cards in a case pending before the Supreme Court.

Despite Myanmar slightly easing its pressure on the Rohingyas due to the international outcry, the refugees continue to flee.

Cannot deport till SC verdict: Experts
Legal experts say that the Indian government cannot deport the Myanmar refugees till the case in the Supreme Court filed against the government comes to some logical conclusion.

Two refugees filed a writ in the Supreme Court last year against the decision of the Indian government to deport them. They want the court to order the government to grant them the status of refugees.

They argued that there is a threat to their lives and already their property has been lost and several of them killed by the Myanmar army. “The Central government opposed their petition and argued that they are a threat to the country. But the petition filed by the government has no legal standing in court if one takes into account the humanitarian aspects based on the United Nations charter

“Nevertheless, till the Supreme Court gives a judgment in the case they cannot be deported or sent away,” says High Court lawyer Khaja Aijazuddin, who intends to file an intervening petition in the case.

Senior High Court advocate Shafeeq ur Rahman Mahajir says that legally the government has not accorded the status of refugees to the Rohingyas staying in India.

“Any government has a right to initiate action against persons illegally staying in the country. But as the matter is sub-judice, it has to move cautiously. The government has its own security concerns which are over the humanitarian issues,” he argues.

Mazhar Hussain of Confederation of Voluntary Associations   (COVA), who is working in coordination with the UN High Commission for Refugees in rehabilitating the Rohingyas in the city, said that the United Nations charter specifies t that any person who faces threat in his native country can take refuge in another country where he feels safe

The first batch of Rohingyas came to India in 2012 following unrest in the Arakan and Rakhine region of Myanmar. There are close to 3,800 Rohingya refugees staying in Kishanbagh, Balapur, Mir Momin Pahadi and Shaheennagar in the southern side of the city.