It has also banned Karvy from acting on behalf of its clients exercising its power of attorney. 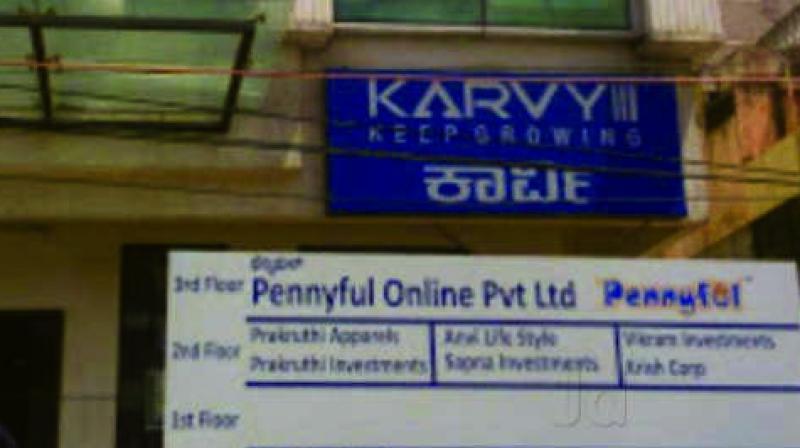 An ex parte order is typically issued without giving an opportunity to the accused to explain his side of the story.

Hyderabad: The National Stock Exchange (NSE) has accused C. Parthasarathy-led Karvy Stock Broking Limited (KSBL) of swindling nearly Rs 2,000 crore by making fraudulent and unauthorised transactions through  both off-market and market dealings. The fraudulent transactions were made by Karvy allegedly without the knowledge of its clients from April 2016 to September 2019.

Based on the findings of the NSE investigation, capital market regulator Securities and Exchange Board of India (Sebi) on Saturday issued an ex parte interim order banning Hyderabad-based broking house from onboarding new clients till further notice. It has also banned Karvy from acting on behalf of its clients exercising its power of attorney.

An ex parte order is typically issued without giving an opportunity to the accused to explain his side of the story. Such orders are issued in matters that require urgent attention. The Sebi has asked Karvy Stock Broking to explain its version within 21 days. On its part, the NSE has appointed a forensic auditor to examine in detail the cases of misuse of client funds and securities by Karvy Stock Broking.

While issuing the interim order, the Sebi reproduced parts of the NSE’s preliminary report that levels serious allegations of misappropriating client’s money against Karvy Stock Broking.

“KSBL credited the funds raised by pledging of client securities to six of its own bank accounts instead of its client accounts and further has not reported these six own bank accounts to Exchange which is required to be reported under the Sebi provisions,” the market regulator said in its order.

“Prima facie a net amount of Rs 1,096 crores has been transferred by KSBL to its group company i.e. Karvy Realty Private Limited between from April 1, 2016 to October 19, 2019,” the Sebi order claims citing the NSE report.

The exchange also claimed that Karvy Stock Broking has sold excess securities, which are available in its DP account to the tune of Rs 485 crore through nine related clients till May 31, 2019. It has also allegedly transferred excess securities to six out of these nine related clients to the tune of Rs  162 crores till May 31, 2019.

The NSE report also claims that Karvy Stock Broking has transferred securities worth Rs 27.8 crore, through off-market transactions, from the beneficial owner accounts of 156 clients who have not executed a single trade with them. Apart from this, securities worth Rs 116.3 crore were observed to have been transferred from 291 clients who have not traded with KSBL since June 1, 2019.

“On subsequent verification, it was observed that securities worth Rs 257.08 crore, pledged on behalf of 4 clients out of the aforesaid 9 clients, were unpledged during June 1, 2019 to August 22, 2019 and securities worth of Rs. 217.85 crore were recovered by KSBL from 4 out of the said 9 client accounts,” the NSE report claimed.

“KSBL have also purchased securities in 5 out of the respective 9 client accounts amounting to Rs 228.07 crore during the period from June 1, 2019 to September 8, 2019. KSBL had undertaken the recovery/purchase of securities to recoup the securities shortfall,” it added.