The BJP delegation complained to Mr Singh about alleged “political terrorism of Trinamul Congress in the state. 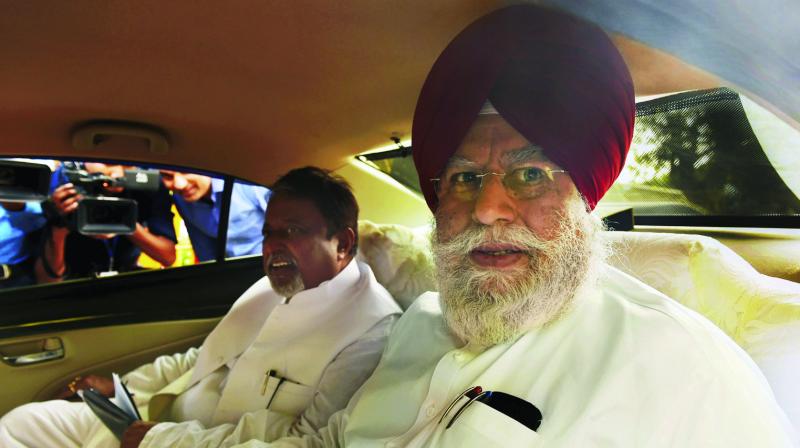 BJP leaders S.S. Ahluwalia and Mukul Roy on their way to submit a memorandum to NHRC chairman H.L. Dattu regarding the killing of two West Bengal students in New Delhi. (Photo: PTI)

Kolkata: The family members of the two students: Rajesh Sarkar and Tapas Barman who were allegedly killed in police firing in violence over the teachers’ recruitment at Daribhit High School in Islampur of North Dinajpur, have travelled to New Delhi to meet President Ramnath Kovind at Rashtrapati Bhavan on Monday, to demand a probe by the Central Bur-eau of Investigation and justice into the deaths.

Mounting pressure on the Mamata Banerjee government, a BJP delegation was scheduled to meet Union home minister Rajnath Singh following his arrival to the city on Sunday evening, to chair the high profile Eas-tern Zonal Council meeting, at Nabanna auditorium on Monday with the chief ministers of West Bengal, Bihar, Odisha and Jharkhand, to seek his intervention into the killings.

Rattled by the incident, the Mamata Banerjee government has already han-ded over the case to the criminal investigation department of the district police.

But the progress in the investigation has been wrapped in secrecy.

On Saturday night, the fathers of both the victims travelled from North Dinajpur to Kolkata in the company of a BJP team.

State BJP president Dil-ip Ghosh said, “We are with the families of the victims. A demand of co-mpensation will be pla-ced at the union home ministry, NHRC and the president. The two families are supposed to meet the President on Monday.”

The BJP delegation complained to Mr Singh about alleged “political terrorism of Trinamul Congress in the state.