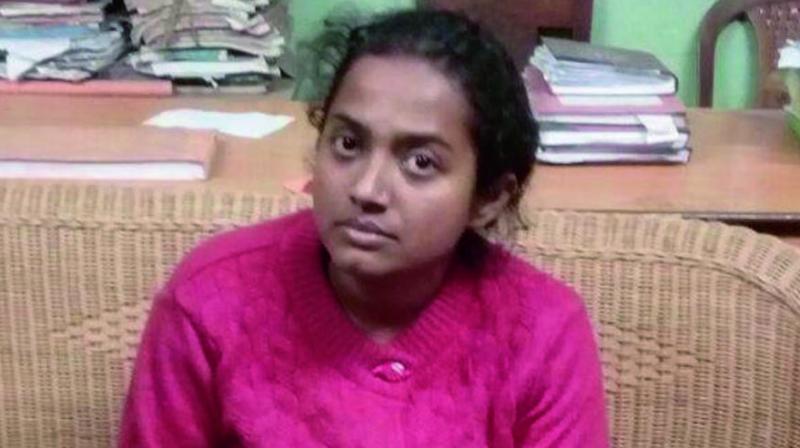 Kolkata: State BJP leader Juhi Chowdhury, who was arrested by the criminal investigation department (CID) in the child trafficking racket in North Bengal on Tuesday night, was remanded in 12 days’ CID custody by the district court in Jalpaiguri on Wednesday. She claimed herself to be innocent. Red-faced by her arrest, the state BJP, however, removed her from her post of general secretary of the party’s women’s wing.

Juhi’s arrest also prompted the party to remove her father Rabindra Narayan Chowdhury from its state committee of which he was a member. State BJP president Dilip Ghosh said, “The party has decided not to keep Ms Chowdhury in any post of the party. We have removed her and her father from party posts. Ms Chowdhury visited New Delhi keeping the party in dark. This created a controversy which tarnished the party’s image.”

He added, “Besides, they (father-daughter duo) have been officially accused of an offence. The allegations against them are so serious that we cannot accept it positively. Law is taking its own course. If they can prove themselves innocent in the eyes of law, the party will get in touch with them.” This is the second time a BJP leader has been arrested by the CID in the baby trafficking racket the state detective agency busted in November last year.

Earlier Dilip Ghosh, a doctor from Salt Lake who had even contested the municipal elections as a candidate, was arrested for his alleged role. Juhi was absconding since her role came to light last month after Chandana Chakraborty, a school teacher who ran a rehabilitation centre, was arrested in Jalpaiguri. But arresting Juhi was not an easy task as she kept her cellphone switched off.

She, however, kept in touch with other BJP leaders in Kolkata, sources revealed. Acting on the inputs of electronic surveillance, the CID found Juhi was staying at a house in Kharibari of Darjeeling along the Indo-Nepal border. It learnt that a BJP MP had suggested Juhi to flee to Nepal. A two-member CID team — inspectors Sougata Ghosh and Kakali Ghosh Kundu — was sent there.

Reaching the area they posed themselves as monks at a temple at Batasi and befriended some devotees to identify the house where Juhi was hiding. On Tuesday night, the CID team raided the house in disguise of monks taking some local residents with them and caught her.

In the court Juhi, however, alleged political vendetta against her. “It is a political conspiracy. I have been falsely implicated. Truth cannot be hushed up for ever. One day the truth will come to light. My ideology of the BJP will not change with my arrest. I will remain a BJP worker,” she said.