Banerjee added that rampant job loss has been reported across the country with the agriculture and unorganised sector being the worst hit. 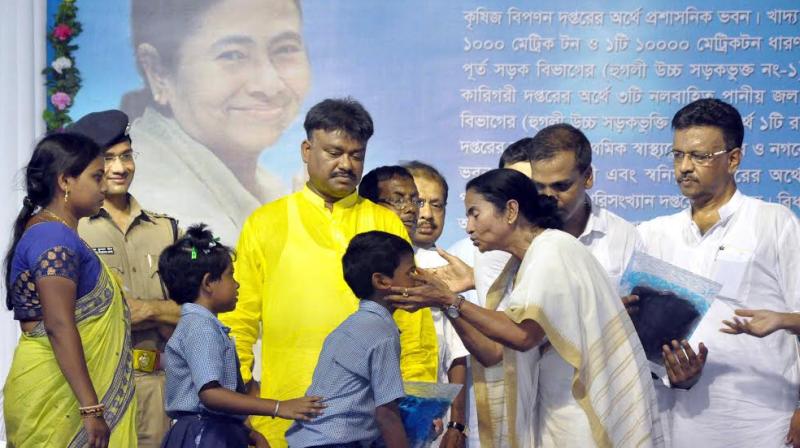 Chief Minister Mamata Banerjee provides with financial helps and books to schoolchildren at a function in Tarakeswar. (Photo: Abhijit Mukherjee)

Kolkata: Slamming the Narendra Modi government at the Centre for decline in the GDP growth, Bengal chief minister Mamata Banerjee claimed on Thursday that her apprehension that demonetisation will affect the GDP growth has proved to be true.

“Right at the time demonetisation was announced by the Central government, I had voiced my concern that the country would have to face severe loss of jobs and drastic decline in productivity due to demonetisation.

My apprehension is now proven to be true. The Q4 GDP figure this fiscal has come down to 6.1 per cent. The corresponding GDP figure in the previous fiscal was 7.9 per cent. So, the decline is nearly 2 per cent point,” chief minister Mamata Banerjee wrote on her Facebook page and later highlighted the fact at a government programme at Tarakeshwar in Hooghly district.

Ms Banerjee added that rampant job loss has been reported across the country with the agriculture and unorganised sector being the worst hit. I was the first person who had tweeted and said that demonetisation will cause a slide in the GDP of the country. See, in the fourth quarter, the GDP has come down by 2 per cent.

Lakhs of youth in other states have lost their job and have returned to Bengal. Our government has given financial assistance of Rs 50,000 each to 50,000 youth so that they can do something to eke out a living. What have the people, who pushed the country to this crisis, to say?” she questioned.

She urged the industrialists to come together to protest against the immediate rolling out of GST, a move that the state government has already opposed. Both state finance minister Amit Mitra and chief secretary Basudeb Banerjee will again write to the Centre for delaying the implementation of GST.