The Barrackpore police commissioner led a large contingent of force to bring the situation under control. 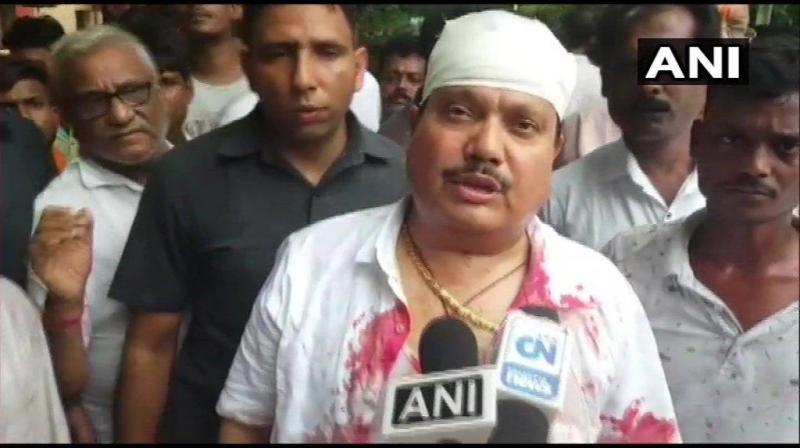 Kolkata: BJP MP of Barrackpore Arjun Singh suffered head injuries while his SUV was damaged in a violent clash which broke out after he along with the party workers tried to resist the Trinamul Congress workers’  attempts to take back control of their party offices from the saffron camp on Sunday morning.

The BJP has called a 12-hour bandh in Barrackpore on Monday in protest against the attack.

Mr Singh accused Barrackpore police commissioner Manoj Verma of hitting his head with a stick. Mr Singh also blamed deputy commissioner of police Ajay Thakur for the violence. According to the BJP, a group of Trinamul activists carrying rods, sticks and bamboo poles, went to take control of the office on Feeder Road in Shyamnagar at around 10 am.

Mr Singh recalled, “I was going to attend a blood donation camp at Mohanpur. On the way I however came to know about the forcible occupation of our party offices by the Trinamul supporters.” He rushed to the spot immediately from Jagaddal, travelling in his white SUV.

Mr Singh was however greeted by a rain of bricks hurled by the Trinamul workers targeting his vehicle. “The attack led by a Trinamul worker Burman Singh unfolded in front of the police. Five of our offices were occupied forcibly. Deputy commissioner of police Ajoy Thakur was behind it,” he claimed.

The BJP MP also got locked in a verbal duel with a police officer. Another round of clash took place between the Trinamul and BJP workers at Meghna More of Barrackpore soon. When Mr Singh rushed there, he came under attack there also.

The Barrackpore police commissioner led a large contingent of force to bring the situation under control.

The cops resorted to lathicharge and lobbed tear gas shells. Mr Singh claimed, “Mr Verma lathicharged on my head. He also abused me verbally. My home was attacked also.” He was taken to a nearby hospital where he received stiches on his injury.  He was later shifted to a private hospital.

Mr Singh claimed that his son: Pawan who is also an MLA from Bhatpara, was injured in the lathicharge by the police. Even the mediapersons were not spared by the police.