3 days after another BJP worker was found hanging from tree in Purulia. 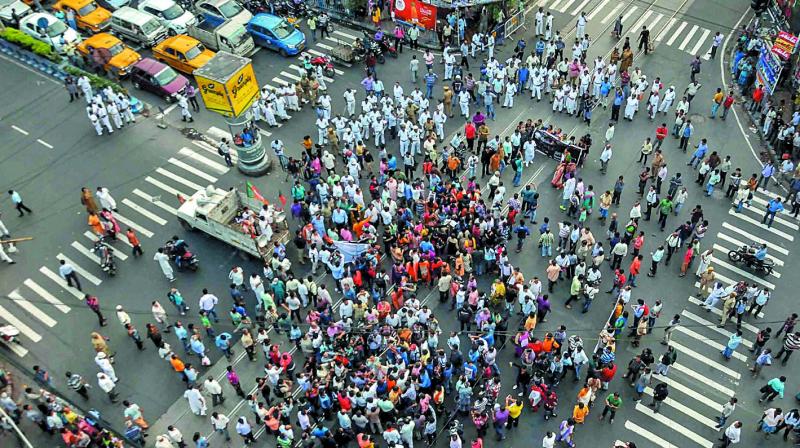 BJP Mahila Morcha and Yuva Morcha activists take part in a rally against recent killings of BJP’s Trilochan Mahato and Dulal Kumar in Purulia, allegedly by the TMC workers, in Kolkata on Saturday. (Photo: PTI)

Kolkata: Close on the heels of a teenaged BJP worker’s death under mysterious circumstances in Purulia another young BJP worker died in the same area of the Jangalmahal district, which witnessed the saffron party’s significant rise in votebank in the recent panchayat elections in a neck-and-neck battle with the Trinamul Congress.

The BJP has called a 12-hour bandh in the district on Sunday to protest the death which it described as murder. Its central leadership tore into the Mamata Banerjee government which later ordered a probe by the criminal investigation department judging the gravity of two back to back incidents of similar nature.

The state government also removed superintendent of police (Purulia) Joy Biswas from his post for calling the first death as murder and the second one as suicide while ruling out any political angle before the probe ends.

The deceased, Dulal Kumar (32), was a leader of BJP’s OBC cell in the district with a large of populace of the tribal community. He returned home on Friday evening after participating in the BJP programme of gheraoing police stations. At night he however left home riding his motorbike.

His family members alleged that when he did not return home, they called him on his cellphone but the call was disconnected.

After mid-night Dulal’s motorcycle was found lying beside a pond. But he remained missing. On Saturday morning Dulal was found hanging with a rope tied around his neck from a rod of a high-tension (HT) tower for power supply at Dava village in Balarampur where he lived.

When the villagers came across the body, they erupted in fury. A police team rushed to the spot to recover the body to send it for post-mortem. But the villagers prevented them while demonstrating with the body for several hours before a clash broke out between both sides.

The body was recovered after the villagers were dispersed as the police lathicharged them. According to Dulal’s family, he was abducted and murdered by the Trinamul workers before the body was hung from the HT tower. His wife alleged that her husband was threatened by the ruling party workers with dire consequences on May 31.

She demanded that her husband’s assailants should meet the same fate he did.

On May 30 morning Trilochon Mahato (18), a BJP worker, who had been missing since May 29 evening, was found hanging from a tree at Supurdih village at a forest in Balaramapur. A poster was also found on the ground.

A line in Bengali: Aatharo Bochhor Boyose BJP Rajneeti (BJP politics at the age of 18) was written in it along with comments of warning to get associated with the BJP and threatening to take his life. The same line was found written by pen on the back of the victim’s T-Shirt after the police brought down the body.

The BJP had then accused the Trinamool of killing Trilochon. Additional director general of police (law and order) Anuj Sharma informed that the CID has been entrusted to probe both the deaths as a conspiracy was suspected in both. He added that the role of outsiders was also under investigation.

On Trilochan’s death Mr Biswas however said, “We initiated a case under section 302 (murder) of the Indian Penal Code. Preliminary investigation indicates a personal enmity or grudge behind the death.

A probe is being conducted properly. The actual culprit will be arrested based on the evidence available in the probe.”

On Dulal’s death he elaborated, “He went missing after going out home to attend nature’s call at around 8 pm. In the morning he was found hanging from the tower. We examined the place of occurrance. It appears to be a case of suicide in view of the symptoms of the body.” Mr Biswas added, “The body has been sent for post-mortem. After post-mortem, the cause of death will be known. I did not find any political angle behind the death.” In the evening he was removed from his post. Akash Megharia who was the special superintendent of police (CID) replaced him as SP (Purulia).

Mr Biswas has been appointed as the commanding officer (ninth battalion) of the state armed police replacing Kankar Prasad Barui who has been made CO(rapid action force) at Durgapur.