The land has a waterbody and an under-construction building. But there was no security guard posted at the site, according to local residents. 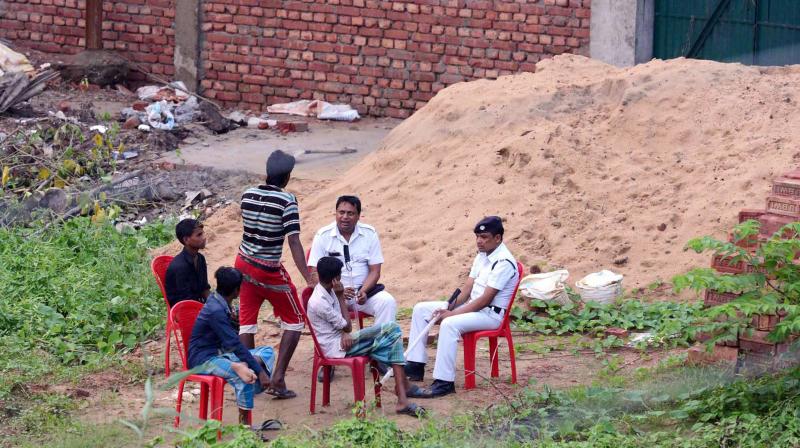 Police personnel and locals keep a strict vigil at the spot in south Kolkata on Sunday. (Photo: PTI)

Kolkata: A mystery unfolded on Sunday afternoon at Haridevpur over the recovery of 14 suspected foetuses, wrapped in multiple packets lying in bushes at a large parcel of land for a realty project. Within few hours the mystery got cracked as the police ruled out foul play saying that the packets had only “dry ice”.

At around 3 pm, the packets were found when cleaning work was underway at the 22 kotah of land which has been lying guarded only by tin sheds on 214, Raja Rammohan Roy for the project. The police said that some workers of Balasaria Group discovered the packets there. The 14 suspected foetuses were taken to M.R. Bangur Hospital for post-mortem.

The land has a waterbody and an under-construction building. But there was no security guard posted at the site, according to local residents.

The locals informed the councillor of ward no 122 Soma Chakraborty who then called up Kolkata mayor Sovan Chatterjee and informed him about the recovery. Tension gripped the area as curious locals thronged to the spot to have a look through the gaps of tin sheds.

They alleged that liquor party became a regular affair there referring to several empty liquor bottles’ recovery. Mr Chatterjee later visited the spot. Kolkata Police Commissioner Rajeev Kumar and joint commissioner of police (crime) Praveen Kumar Tripathy also inspected the spot. A strong contingent of police has been deployed in the area. Cops questioned the workers who found the packets. They also visited some houses to take help if its residents found any abnormal activity at the site.

In the evening, deputy commissioner of police (South West) Nilanjan Biswas said, “We are waiting for the post-mortem reports to know whether these foetuses were newborn or pre-matured and how the deaths happened.”

He added, “Our investigation will go ahead based on the post-mortem reports. The packets were lying near the fencing within a distance of 20-25 feet. There is a possibility that the packets were apparently thrown over the fencing into the land. Another round of search will be conducted after sunrise on Monday.”

The police suspected that the foetuses were the results of abortions at a nursinghome. Later, Mr Biswas said, “No human tissues have been found in the packets when they were opened by the doctors. Some dry ice are there. Examination is on for exact nature of the material.”

Echoing Mr Biswas, Mr Tripathy said, “Doctors of M.R. Bangur Hospital have examined it and verbally opined that they did not find any human tissue or foetus inside. It may be some chemical or clinical waste. But final opinion on this is still awaited.”