The party organised similar protest rallies across the state to condemn the killings. 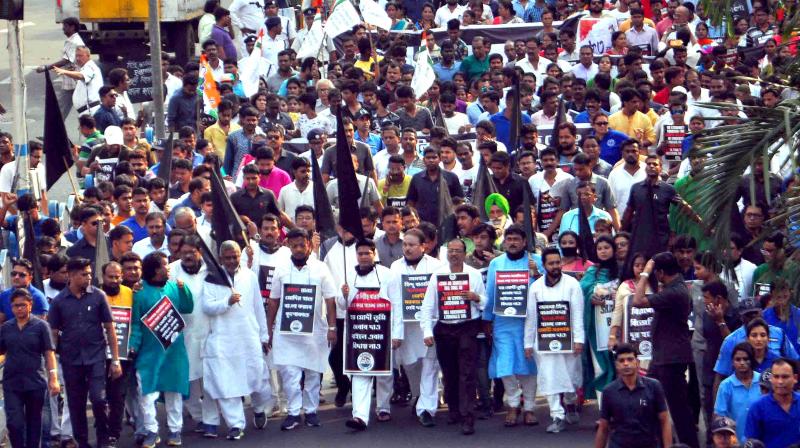 Trinamul Congress MP Abhishek Banerjee, along with party activists, holds a protest rally from Jadavpur to Hazra crossing in Kolkata on Friday against the killing of innocent people in Tinsukia district of Assam on Thursday evening. (Photo: Abhijit Mukherjee)

Kolkata: Trinamul Congress MP Abhishek Banerjee on Friday sought a court-monitored inquiry into the killing of five Bengali-speaking people in Assam’s Tinsukia district and called for the resignation of the neighbouring state’s chief minister over the incident.

Three members of a family were among the five people who were gunned down by a group of assailants on Thursday evening at Kheronbari village, at the edge of Dhola-Sadiya bridge, in Tinsukia.

One person, who fell off the edge of the bridge, survived the firing.

TMC Youth Congress president Abhishek Banerjee, who is also the nephew of chief minister Mamata Banerjee, took out a rally on Friday morning from Jadavpur 8B bus stand to Hazra crossing, in south Kolkata, to protest against Thursday’s incident.

“We demand Assam chief minister Sarbananda Sonowal’s resignation and a court-monitored inquiry into the killing of five Bengalis. We don’t have any faith in the CBI, as it is busy with its power tussle,” the TMC leader said while addressing the rally here.

The party organised similar protest rallies across the state to condemn the killings. The attack on Bengali-speaking people in Assam is “fallout of the draconian NRC exercise”, which omitted 40 lakh people from the citizenship draft, Abhishek claimed.

The complete draft of the National Register of Citizens (NRC), touted to be a proof of Assamese identity, was published in July with names of 2.9 crore people.

More than 40 lakh people, including Bengali-speaking individuals, did not make it to the list.

“Thursday’s attack on Bengalis is also an attack on West Bengal, our culture and heritage. The people of the country are fed up with this anti-people government,” he contended.

Over 40 lakh people are facing deportation from India as their names have been excluded in the NRC draft, the TMC Youth Congress president said.

“Who are they (the BJP) to decide on citizenship? The people of this country want a pro-people and secular government at the Centre. We should all fight together to defeat the BJP in the next election,” he said.

Abhishek also asserted that the ruling TMC would not allow a similar NRC exercise in West Bengal.

“As long as the TMC is in power, there would be no NRC exercise in Bengal, as we don’t believe in divisive politics. We should all vow to ensure that the BJP loses the Lok Sabha election,” he added.

The chief minister, in a Twitter post on Thursday, wondered if the attack was related to developments surrounding the National Register of Citizens (NRC) draft.

“Is this the outcome of the recent NRC development,” she had questioned.

The CM also strongly condemned the incident and offered condolences to the families of the deceased.

“Terrible news coming out of Assam. We strongly condemn the brutal attack in Tinsukia... We have no words to express our deep sorrow to the grieving families. The perpetrators must be punished at the very earliest,” she had said.