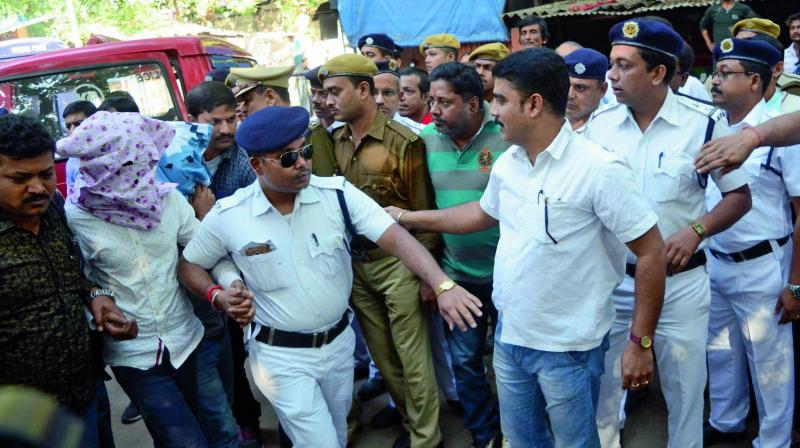 Teachers of GD Bilra Centre for Education being produced at court on Saturday. (Photo: Abhijit Mukherjee)

Kolkata :The two teachers of G.D. Birla Centre for Education, arrested for sexually assaulting a four-year-old student, were remanded in two days’ police custody by the Alipore court on Saturday even as angry protests by the guardians continued for the second day at the school at Ranikuthi.

The four IPS officers also examined the case documents. Later Abhishek and Mafizuddin were produced before the chief judicial magistrate (CJM). Their counsel, Tirthankar Roy, appealed to the judge to send them to the judicial remand for two days till December 4 after the public prosecutor pleaded for a 14-day police remand for the two accused.

To justify his argument he pointed out that the second additional district and sesssions judge has been designated for hearing cases under the charges of Protection of Children from Sexual Offences Act. But the victim’s lawyer Priyanka Tibrewal opposed his move alongwith the public prosecutor. Later the CJM sent Abhishek and Mafizuddin to the police remand till December 4.

The group of guardians demanded the principal’s resignation. Later they took out a rally in the area. In the evening members of a social organisation, who demonstrated outside the school, tried to damage the CCTV. But the guardians foiled the attempt. BJP leader Locket Chatterjee visited the victim at her residence.

“We will see the case till the end legally. If needed, we may move to Calcutta high court and Supreme Court also. We demand the arrest of the school principal who lied and tried to destroy evidence,” she said. Ms Chatterjee supported the protests by the gaurdians who have plans for a sit-in-demonstration on Monday.

The victim’s parents have declared that they would not send their daughter to the same school again. Reacting to the allegation on her son: Abhishek, Kabita Roy claimed that her son was falsely implicated in the case. According to her, he was on leave on the day of the crime on November 30. Ms Roy argued that her son, who was a student of Patha Bhavan at Santiniketan before doing B.Ed, could never be involved in such an incident.

Krishnendu Mukherjee, one of the protesting guardians, said, “We want immediate resignation of the principal and the teacher who had described the accused as ‘naughty boys’ before the media yesterday.”

A guardians' forum will be set up by tomorrow and all grievances will be channelised through that platform, he said adding, “If our demands are not met, we will intensify our protests from Monday.”