The widows of Sikdar and Tikadar - Namita and Dipali told reporters that they were happy after meeting Banerjee. 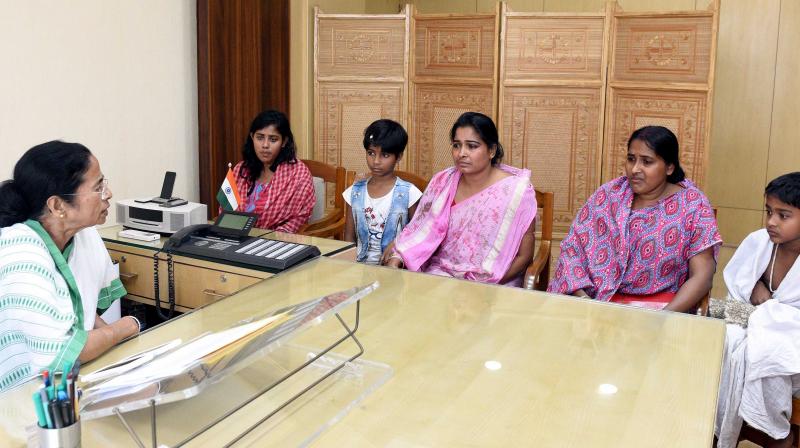 Chief minister Mamata Banerjee, at Nabanna in Kolkata on Friday, talks with family members of the two persons from the state who were captured and killed by terror group ISIS in Iraq. (Photo: Asian age)

Kolkata: West Bengal chief minister Mamata Banerjee on Friday met the families of two persons from the state who were captured and killed by terror group ISIS in Iraq and handed cheques of Rs 5 lakh as compensation to them.

Banerjee promised a government job to a member of the two families from Nadia district when they met her at her office.

The chief minister, who expressed grief over the tragedy, also promised to look after the education of the children of the two men - Khokon Sikdar and Samar Tikadar.

Sikdar and Tikadar had gone to work in Iraq through an agency in 2011 and their families lost contact with them in mid-2014.

The coffins carrying their mortal remains were brought to the state early this week and handed over to their families for the last rites.

The widows of Sikdar and Tikadar - Namita and Dipali told reporters that they were happy after meeting Banerjee.

The chief minister later told reporters that she met the family members and was moved by their plight. “One of the families live in a village bordering Bangladesh and reside in a house which is not in a very proper condition. We have to see if their houses can be renovated,” she added.