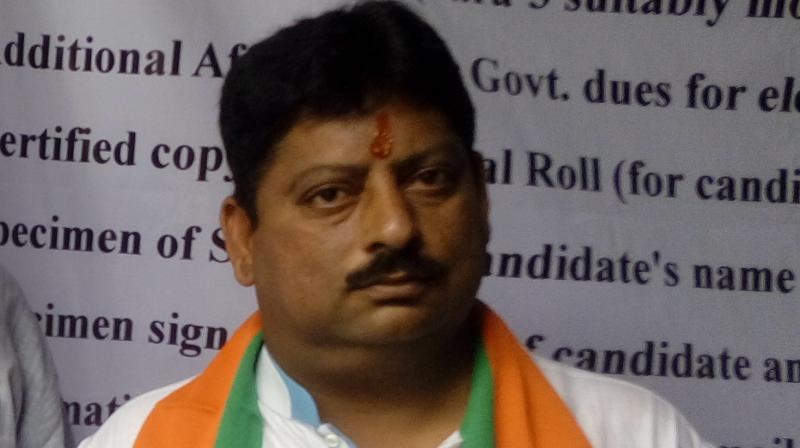 Kolkata: Seven people, including a BJP leader, have been arrested by the special task force (STF) of the Kolkata police for their alleged involvement in smuggling coal, police said, adding that cash amounting to Rs 33 lakh was seized from their possession.

The arrest of Manish Sharma alias Manish Joshi (44), the BJP’s Raniganj unit president in Burdwan, is another setback to the party’s state unit, which was recently left embarrassed following the arrest of its leader Dilip Ghosh in the child trafficking racket. In the latest arrest, of the total cash seized, Rs 10 lakh was recovered from the BJP leader’s possession, said joint commissioner of police (STF) Vishal Garg.

“Acting on a tip-off, the STF intercepted a vehicle last (Monday) night when they were travelling along Bidhan Shishu Uddan Sarani. After a search, several illegal firearms, ammunition and `33 lakh in cash were seized from them,” the officer said.

Suspected to be the main brain behind the coal mafia of Durgapur-Asansol belt, Rajesh Jha of Durgapur (Burdwan) was arrested and an improvised semi-automatic pistol fitted with magazine having two live cartridges, and a mobile phone, were seized from him, the officer said. Mr Garg added that a raid was also conducted at Lokesh’s flat in Panchabati Complex off VIP Road in Baguiati from where Partha was arrested with a semi-automatic pistol fitted with a magazine loaded with two round live cartridges, an arms licence issued on his name, a .32-bore revolver, 31 rounds of 32 bore live cartridges, Rs 8 lakh in cash and a cellphone.

The seven arrested have been booked under section 120B (punishment of criminal conspiracy) of the IPC and relevant sections of the Arms Act. They have been remanded in police custody till December 9.

Originally from Biman Nagar in Pune, Manish alias Chintu fought this year’s Assembly elections as a BJP candidate from Raniganj. Union minister of state for heavy industries and BJP Asansol MP Babul Supriyo campaigned for him but he lost.

Asked if Manish got the ticket in exchange of money, Mr Supriyo said, “I do not know that but I feel embarrassed now.” Manish was also seen with many other Central and state BJP leaders. The state BJP quickly distanced itself from Manish. State BJP president Dilip Ghosh said, “Our party will spare none. If anyone committed an offence, it is his task to prove his innocence. The party will not take his side.”

A drama unfolded when some syndicate businessmen of Rajarhat-New Town area called up the Bidhannagar police commissionerate’s senior officers and asked if the accused took their name.