The bust, placed by Syama Prasad Mookerjee Memorial Samity at the park run by the Kolkata Municipal Corporation, was unveiled on June 23, 1986. 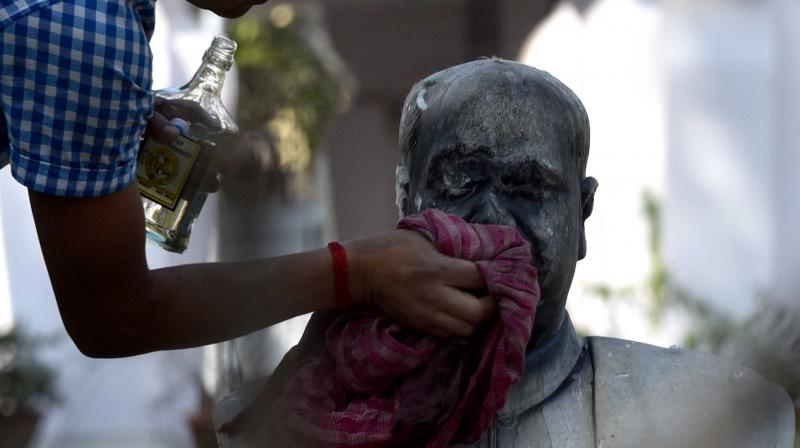 A police official along with a group of people clean the bust of Dr Syama Prasad Mukherjee after it was vandalised at Keoratola Mohasoshan in Kolkata. (Photo: Abhijit Mykherjee)

Kolkata: Close on the heels of the toppling of Communist revolutionary Lenin’s statue in Tripura and vandalism of rationalist Periyar’s statue in Tamil Nadu, bust of Syama Prasad Mookerjee, the founder of Bharatiya Jan Sangh, which later led to the formation of the BJP, was desecrated by a group of seven young members of an ultra Left outfit on Wednesday morning in south Kolkata. The accused, being members of RADICAL, were arrested by the police.

They have been remanded in two days’ police custody by the court. At around 8 am, the group entered Chittaranjan Das Park on Keoratala crematorium premises on Tollygunge Road near the Kalighat Metro station dodging the security guard. One of them scaled the bust, as another stood guard on the ground. The man who had climbed up the statue started hitting its temple with a hammer and a chisel. Others shouted slogans against the razing of statues of Lenin and Periyar and left a poster revealing the outfit’s identity. After damaging the bust they defaced it with black ink.

The entire attack — which took place hours before the state BJP’s law violation programme to the city police headquarters at Lalbazar — was videographed. Some local residents rushed to the spot and caught the accused, including a woman, who were trying flee. The accused were handed over to the Tollygunge police.

Kolkata police commissioner Rajeev Kumar said on Twitter, “Six male and one female (age 22-29 years) who tried to deface the bust of Dr Shyama Prasad Mukherjee have been arrested from the spot by Kolkata police and strong legal action initiated. No vandalism would be tolerated.”

The video of the vandalism of less than a minute went viral. Some BJP leaders went to the park to garland their icon to pay respects. A scuffle broke as Trinamul Congress workers resisted them.

State power minister and Trinamul MLA from Rashbehari Sovandeb Chattopadhyay visited the park. Condemning the incident, he said, “Our chief minister has already made it clear that we will not tolerate vandalism of statues of luminaries. It is a shameful act. We are satisfied that the miscreants were arrested. It was the locals who informed the police. We will not allow such things to happen here. It is not our culture.”

State BJP president Dilip Ghosh said, “This is not the first time such an incident took place here. The Naxals earlier blackened the statues of many luminaries including freedom fighter Khudiram Bose. Some of them were broken even. Some anti-nationals desecrated the bust of Syama Prasad, a great nationalist. But we will purify it with milk on Thursday.”

The bust, placed by Syama Prasad Mookerjee Memorial Samity at the park run by the Kolkata Municipal Corporation, was unveiled on June 23, 1986.

One of the arrested, Abhishek Mukherjee, is allegedly a Maoist leader and ex-student of Jadavpur University, and had led the attack. Deb Chakraborty, a student of Economics, Jubi Saha, an M.Tech student, Bishwarup Pramanik, a PhD student and Debjit Bhattacharya are JU students, Surajit Das is a student at an open university and Subrata Ghosh of Chapdani.

“We broke and blackened Syama Prasad’s bust to protest the toppling of Lenin’s statue by the BJP-RSS combine, ” Abhishek said justifying the attack.

In September of 2012, Abhishek, alias Aranya, who was allegedly the CPI(Maoist) Kolkata city committee secretary, was arrested by the special task force (STF) of the city police. The Maoists had earlier declared him dead to mislead the police. In March of 2014, the Calcutta high court, however, granted bail to Abhishek after the STF had failed to get sanction from the Centre to charge him on UAPA charges.