A largely ceremonial post bestowed for one year on a prominent citizen of Kolkata, the sheriff has his office in the Calcutta High Court premises. 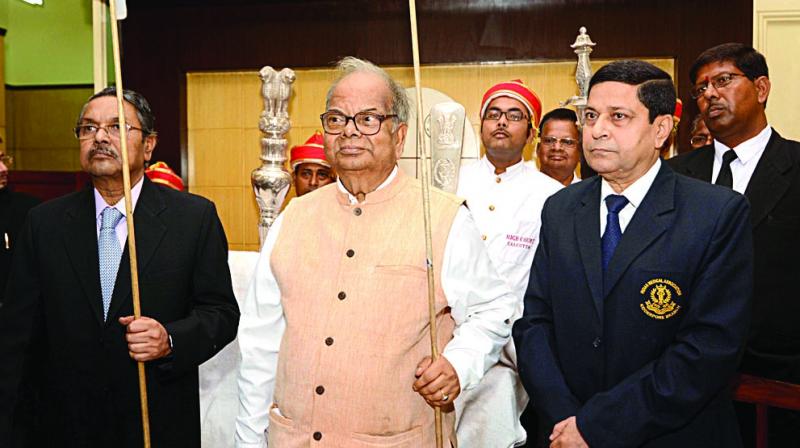 Kolkata: The city got its 245th sheriff in prominent Bengali litterateur Mani Sankar Mukherjee on Monday, as he took oath at the Calcutta High Court here.

The outgoing sheriff Dr Sanjoy Chatterjee administered the oath of office to the octogenarian writer who is popularly known as Shankar, his pen name.

A largely ceremonial post bestowed for one year on a prominent citizen of Kolkata, the sheriff has his office in the Calcutta High Court premises.

In the year 1775, “The sheriff’s post was created for the city and James Macrabey was the first to hold the chair.

The first Indian appointed as “The Sheriff of Calcutta” was Manakjee Rustomjee in 1874, while the first Bengali to have adorned the post was Raja Digamber Mitter in 1875.

In his acceptance speech, Mr Mukherjee said it is a remarkable day in his life, making him “feel very humble as the new sheriff, as I pay my respect to all my predecessors who have been great sheriffs of a great city called Calcutta.”

The writer said he first stepped into the majestic high court building in 1951 as a teenager in search of a job and was soon appointed a “babu” by Noel Barwell, the last British member of the Bar of England practising at the Calcutta High Court.

After Barwell’s death, Mr Mukherjee narrated his association with the barrister in his first novel, Kato Ajanare (The great unknown).

“There were many books in Mr Barwell’s library at 6 Old Post Office Street. I still remember a highly interesting bound volume about the sheriffs of Fort William by Charles Moore, never imagining that one day I will walk into the historic High Court building to take my oath as the sheriff of Calcutta,” Mr Mukherjee said.