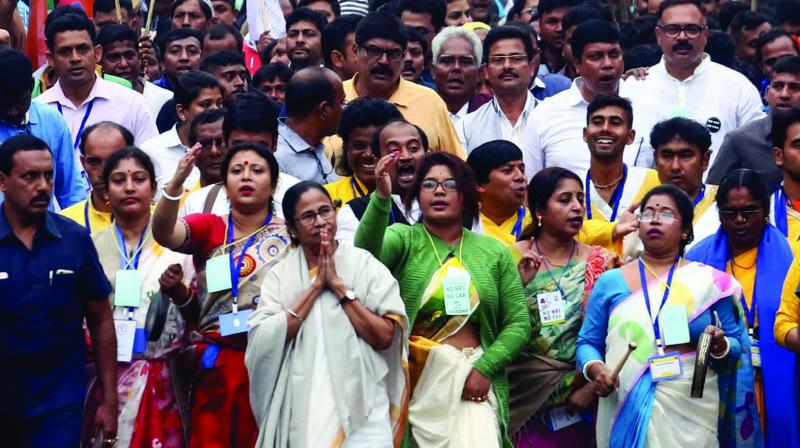 Kolkata: “If needed, I will fight alone,” a livid Mamata Banerjee declared on Thursday in the West Bengal Assembly where she said she will boycott a meeting called by Congress interim president Sonia Gandhi on January 13 over campus violence and the CAA, exposing the opposition faultlines on the issues.

Ms Banerjee, also the TMC president, was angry over incidents of violence in her state during a trade union strike called by organisations affiliated to the Left and the Congress over “anti-people” policies, including economic measures and livewire issues like the new citizenship law and a pan-India NRC. “I have decided to boycott the meeting convened by Sonia Gandhi on January 13 in New Delhi as I do not support the violence that the Left and Congress unleashed in West Bengal yesterday (Wednesday),” She announced on the floor of the House when the Opposition insisted that the House pass a resolution against the CAA.

She said since the House had already adopted a resolution against a pan-India National Register of Citizens (NRC) in September last year which den-ounced according Indian citizenship to minorities from Bangladesh, Pakistan and Afghanistan on the basis of religion, there was no need for a fresh resolution.

As Opposition MLAs insisted on a fresh resolution, the tempestuous lea-der launched into a harangue, defending her stance and declaring she will not attend the meeting called by Mrs Gandhi.

“You people follow one policy in West Bengal and a totally contradictory policy in Delhi. I don’t want to be on the same page with you. If needed, I will fight alone,” she declared, as she mounted an onslaught on the Congress and Left members.

West Bengal was rocked by incidents of violence and arson during the strike called by trade unions linked to the Left and the Congress on Wednesday.

Those supporting the strike had clashed with police and vandalised public property.

Ms Banerjee had said though she empathised with the strikers and supported their cause, she was against a shutdown as it inconvenienced comm-on people and adversely affected economic development.

The meeting called by Gandhi is being seen as an attempt to bring together all opposition parties against the Modi government, which is facing unmitigated fire from the opposition over Sunday night violence at the JNU. The opposition has blame-d the Akhil Bhartiya Vidyarthi Parishad (ABVP), the student front of the RSS, for the violence.

Ms Banerjee asserted the TMC will continue its protest against the CAA and the NRC but will not brook any shutdown over these issues in her state, calling it part of “dirty politics” by the Left and the Congress.

She also sought “forgiveness” of opposition leaders who will attend the meeting called by Gandhi, saying “it  was I who had mooted the idea”.

“But, after what happened yesterday in my state, it will not be possible for me to attend the meeting,” she said.