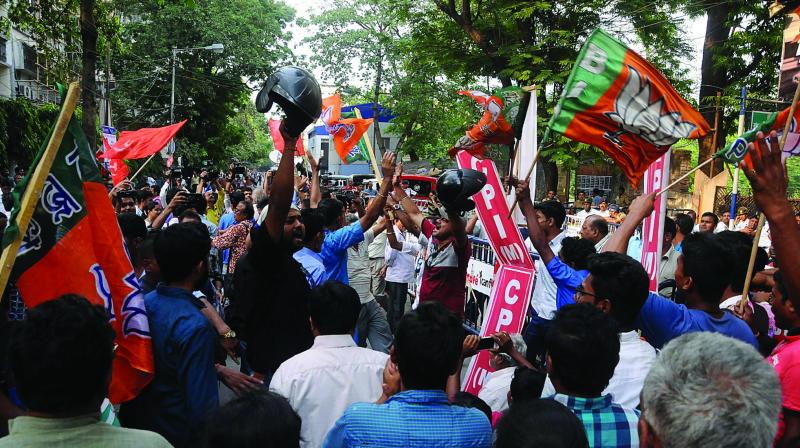 Kolkata: Dashed by the Supreme Court’s refusal to interfere into the panchayat elections, state BJP president on Monday said that he accepted the apex court’s ruling bowing down while the ruling Trinamul Congress welcomed the verdict.

State BJP president Dilip Ghosh said, “We have nothing to say on what the SC thought and gave its ruling. We accept the ruling bow down.”

He argued the party had moved the apex court in view of the present turbulent situation similar to the one in 2013 when state election commissioner Mira Pande moved the SC seeking for the central para-military forces and the SC passed the ruling.

According to Mr Ghosh, the BJP was aware that the Trinamul would use muscle power against the opposition in the rural polls.

He added, “But the SC ruled that it would not intervene and the state election commission has been entrusted for everything. We knew that such a situation may unfold also. So we have filed our nominations with the help of our organisation’s power. In many districts, we did according to our expectation. We have filed around 25000 nominations.”

The state BJP president complained, “But in four to five districts where the Trinamul fielded their strongmen to prevent us from filing our nominations, our workers could not enter. But we are not leaving the field.”

A BJP delegation visited the state election commission office during the later.

On the SC’s ruling he said, “We have enough regards towards the law and the judiciary. We have faith in the judiciary and the people. We have told the state poll panel that it should conduct a free and fair polls without bowing down to any pressure.”

Meanwhile, the state Congress president Adhir Choudhury moved the Calcutta high court to file a contempt of court petition against the state administation into the attack on Congress candidates at Kandi in Murshidabad on April 7 even after the superintendent of police of every district was ordered by a division bench to ensure that the candidates could file their nominations freely.

He said, “It is shocking to see how the administration dares to ignore the high court’s order. Then where will the common people go? I have been asked to file an affidavit since one of the two judges who passed the order recently to the administration was not present.”