He added, “I cannot go beyond the law. When I am in chair, my stand is something which is not same when I am not in chair. 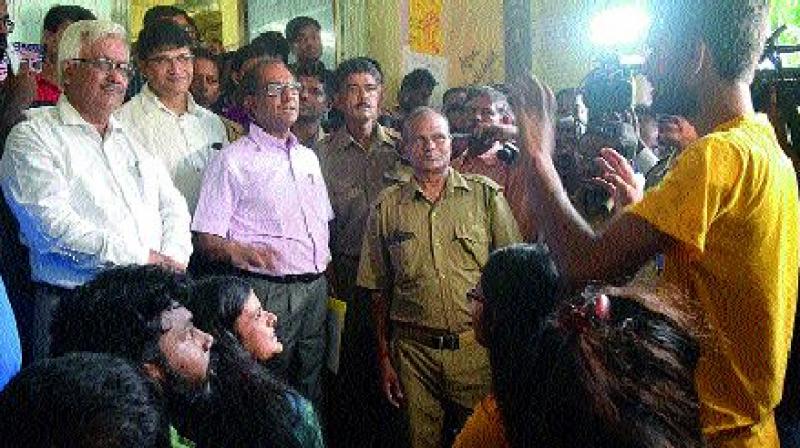 Kolkata: West Bengal governor Keshari Nath Tripathi on Monday appealed the group of students of Jadavpur University (JU), observing an indefinite fast demanding an entrance examination for the students’ admission in the under-graduate courses, to end their agitation.

Asking JU vice-chancellor Suranjan Das to abide by JU executive council’s decision, Mr Tripathi also advised him to exercise his powers within fast, after Prof Das clearly admitted of his failure in his role to calm down the agitating students while indicating to them that he would not continue in his post longer.

Press secretary to the governor Manab Bandyopadhyay stated, “The hon’ble governor Shri Tripathi as chancellor of Jadavpur University is concerned about the high reputation of the university as also the well-being and health of the students of the university, who are on hungerstrike. He has already replied to the letter of the vice-chancellor on the issues involved.”

He added, “Hon’ble governor appeals to the students of Jadavpur University to uphold the prestige of the university and withdraw the strike so that the situation returns back to normalcy.”

In his reply-letter to Prof Das, Mr Tripathi informed him his office received his letter on the impasse over the students’ admission for BA (Hons) on July 7, sources revealed.

Sources disclosed that the governor told Prof Das, “In view of the fact stated in your letter and the provisions of the Jadavpur University Act, Statute and Regulations, it is apparent that the Vice Chancellor has to abide by the decision of the executive council of the university. It is needless to say that in case of any exigency, you as the vice chancellor, are empowered under the provisions of the Act, Statute and Regulations to take such action as may be necessary.”

During the day, Prof Das visited the agitating students. Addressing them he said, “I cannot do anything unless I get the chancellor’s opinion. I want to wait till that. I again appeal you to put your fast on hold till the chancellor’s report comes. I do not know when it would come, may be today or tomorrow.”

He added, “I cannot go beyond the law. When I am in chair, my stand is something which is not same when I am not in chair. You would not have to see me longer. I do not want to lose my autonomy. That is why I met the chancellor... I would have nothing to say had the admission committee accepted my points. It would have been 50:50 then. But they did not accept it. What can I do? I have failed. I could not do it. I have failed.”