On Monday, Paresh Pal accused Sadhan Pande of going after others in the party and harming them and the party only. 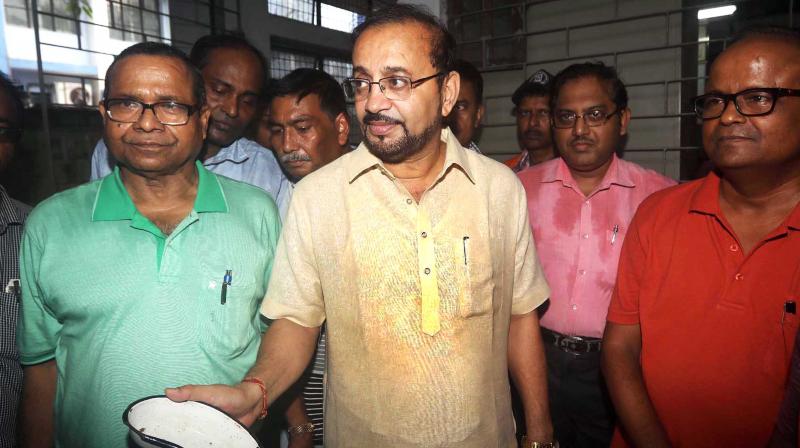 Kolkata: A tussle between two heavyweight Trinamul Congress MLAs of two adjoining constituencies over the construction of Wall of Fame at Kankurgachhi in North Kolkata has once again exposed the internal feud within the ruling party.

On Monday, Paresh Pal accused Sadhan Pande of going after others in the party and harming them and the party only.

Triggering a controversy, the Beliaghata MLA also held the Manicktala MLA responsible for the death of former Trinamul leader and former Union minister Ajit Panja. In a philosophical approach, Mr Pande, who is also the state consumer affairs minister, took potshots at him.

Wishing him to regain sense he also sought Trinamul supremo and chief minister Mamata Banerjee to reply to Mr Pal’s volley of attacks on him.

Mr Pal, lashing out at Mr Pande, claimed, “Are we doing it on his instruction or are we following his words? Who is he? I will not give any answer to his question. He is totally characterless, uncivilised, an animal... Someone can not make any comment according to his whims at a blood donation camp here. Only he knows what the problem is with the wall. He has not done anything in his area.”

“Whatever has been done in his area was done by Ajit Panja. He has no work. His only work is to go after the others — Atin Ghosh, chairman Anindya, Sunanda, Tarak Chattopadhyay. Shashi Panja’s father-in-law died almost because of him. It is unfortunate for us that a characterless like him is harming our party. Hatibagan in ward No. 11 does not fall under the area of Mr Pande.”

Spewing venom on his party colleague, Mr Pal alleged, “The footpath beside the road and the shops have been guarded now on both sides. Where was he earlier? In this area around 20-25 shops and toilets used to turn into liquor dens in the evening. No one could walk around even. Local people had to take a detour if they had to go somewhere. Where was he then? Has he come to grow flowers in our garden which is already decorated?”

“Who can he tolerate? He almost took the life of Ajitda,” he argued. Bantering Mr Pal’s allegations, Mr Pande said, “May good sense prevail upon him. Since I am a minister of Ms Banerjee’s Cabinet, I will not reply to an MLA’s comments irrespective of what he spoke about me. The chief minister will have to give the reply to his comments because she is the chairperson of our party. So I will not reply to his comments.”