West Bengal governor Jagdeep Dhankhar said, “I am happy that the SC has decided an issue that was engaging attention all over the country. 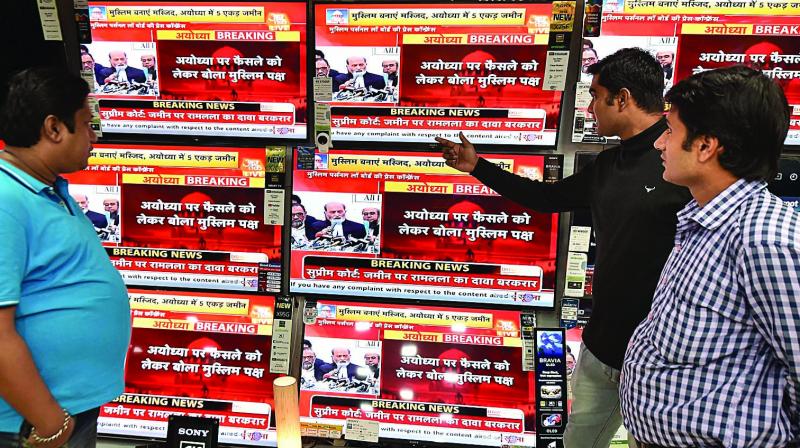 People stand near an electronics shop as they watch news on the Supreme Court’s verdict on the Ayodhya case, in Kolkata on Saturday. The apex court on Saturday cleared the way for the construction of a Ram Temple at the disputed site at Ayodhya, and directed the Centre to allot a 5-acre plot to the Sunni Waqf Board for building a mosque. (Photo: PTI)

Kolkata: West Bengal chief minister Mamata Banerjee and her party Trinamul Congress have switched to silence after the Supreme Court's historic judgment in the Ayodhya case on Saturday morning.

In sharp contrast to other political parties and their stand, neither Ms Banerjee nor any leader of her party was heard uttering a single word on the outcome of the decades-old dispute.

This prompted the BJP to question the Trinamul’s silence as governor Jagdeep Dhankhar urged all to accept the judgment “wholeheartedly”.

The Trinamul supremo and her party earlier  adopted similar stand after the BJP won 18 seats out of 42 in the Lok Sabha elections in West Bengal and the Centre's abrogation of Article 370 of the Constitution.

Trinamul insiders however revealed that an instruction has been issued by the party’s top leadership to all the senior functionaries, ministers, MPs and MLAs not to comment in the media or in public after the five-judge bench announced its verdict.

Some of them pointed out Ms Banerjee’s open challenge to the BJP to build Ram Temple in Ayodhya and accusation on the saffron camp of using Lord Ram as a “polling agent” during the Lok Sabha election.

Tearing into the Trinamul for its silence, state BJP president Dilip Ghosh alleged, “The Trinamul Congress maintains silence when it comes to India’s integrity and tradition. They do the same in case of national interest because they always calculate votes. We know that. They had maintained silence in the past also when it came to surgical strike and airstrike in Pakistan, Pulwama killings and abrogation of the Article 370 of the Constitution.”

The BJP MP of Midnapore argued, “So it becomes difficult for those, who play such politics, to make any comment on a verdict like the Ayodhya case. A two-edged knife is always there in question of profit and loss. The BJP’s politics is in  interest of the country. We do not hesitate to comment on what is good for  society. I think the Trinamul would even be able to comment on this (Ayodhya case) also in future.”

West Bengal governor Jagdeep Dhankhar said, “I am happy that the SC has decided an issue that was engaging attention all over the country. I had appealed yesterday and I am saying so today that the judgment should not be looked as victory or defeat for anyone. We all stand for the great unity and strength of this nation. A judgment of the SC is a judgment not for one party or the other. That is a judgment to be accepted wholeheartedly and worked on.”

He added, “I would appeal to all sections of  society that after indulgent hearing for several decades the issue has come to be determined by the highest court of the largest democracy on earth.

“And that judgement should be respected by all. A judgement is final determination by the highest court of the land. We are all obliged  under the Constitution to take it wholeheartedly in earnestness, decency and decorum.”