In it bulletin at 9 pm, the India Meteorological Department informed that the cyclone would weaken further and gradually. 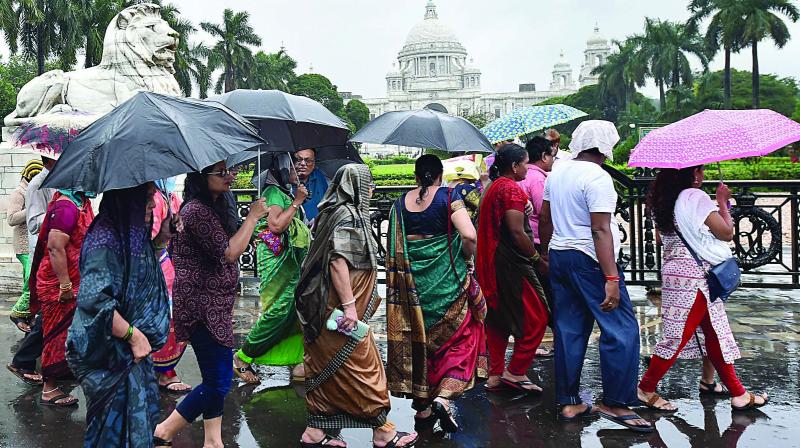 Visitors use umbrellas to protect themselves from rain outside Victoria Memorial in Kolkata on Saturday. The very severe cyclonic storm Bulbul over the Bay of Bengal is likely to make landfall between West Bengal-Bangladesh coasts by late Saturday evening or night, bringing in its wake very heavy rain and gale wind. (Photo: PTI)

It crossed the West Bengal-Bangladesh coasts between Sagar Islands in South 24 Parganas and Khepupara in Bangladesh in between 8 pm and 11 pm with a maximum sustained wind speed of 110-120 kmph gusting to 135 kmph.

In it bulletin at 9 pm, the India Meteorological Department informed that the cyclone would weaken further and gradually.

It said, “Landfall process started. Forward sector of the Wall Cloud Region is entering into land.”

Several areas, including Kakdwip and Bakkhali in the Sundarbans, were hit followed by heavy rain which lashed the city since morning. The extent of devastation is yet to ascertained till the reports last came in.

Train services were affected in Lakshmikantapur-Namkhana section of the Eastern Railway. The Mamata Banerjee government already evacuated 1.20 lakh people from the coastal areas of the state. Cyclone “Bulbul” clocked a maximum sustained wind speed of 120-130 kmph gusting to 145 kmph when it was in “Very Severe Cyclonic Storm” form at 5.30 pm. Chief minister Mamata Banerjee monitored the situation from the control room at state secretariat: Nabanna since afternoon.

She tweeted, “Our State Administration is closely monitoring the situation 24x7. We are taking all measures to tackle any contingency. Special Control Rooms have been set up and NDRF-SDRF teams are deployed. Schools, colleges and anganwadi centres have been closed and more than 1 lakh 20 thousand people have already been rescued from the vulnerable coastal areas. Please do not panic. Kindly remain calm and co-operate with the administration in its rescue and relief efforts. Be alert, take care and stay safe.”

Flight operations have been suspended at the Kolkata Airport for 12 hours till 6 am on Sunday. In the morning a youth died after a tree got uprooted due to constant rain and fell on him at a club in Ballygunge.

The victim, Sheikh Sohel (28) of Gobinda Khatik Road, was the club's kitchen staff. At around 9.50 am the tree got uprooted inside the club ground. It fell on Sohel when he was entering through the main gate.

He was declared brought dead at a private nursing home. Naval officer-in-charge (West Bengal) Commodore Suprobho K De informed that ships and aircraft of the Indian Navy have been standby for rescue and relief operations as the Eastern Naval Command is closely monitoring the movement of the Cyclonic Storm.

He said, “Naval aircraft deployed in the Bay of Bengal have been warning fishing boats about the impinging cyclone and advising them to return to the nearest harbour for shelter.

“Three IN ships at Visakhapatnam are standby with relief material embarked for immediate deployment to the most affected areas to undertake humanitarian aid distress relief operation.”

Cmde De elaborated, “Additionally, ten diving and medical teams are also kept ready for augmenting rescue and relief efforts in Odisha and West Bengal. Naval aircraft are kept ready at Naval Air Station, INS Dega to undertake aerial survey of the most affected areas, casualty evacuation and airdrop of relief material as required by the state administration. NOIC of West Bengal and Odisha are in constant liaison with state administrations for rendering assistance as required.”