The duo was seen fleeing by local residents from the venue on Majidpur Phulbari football ground after shooting Biswas from behind. 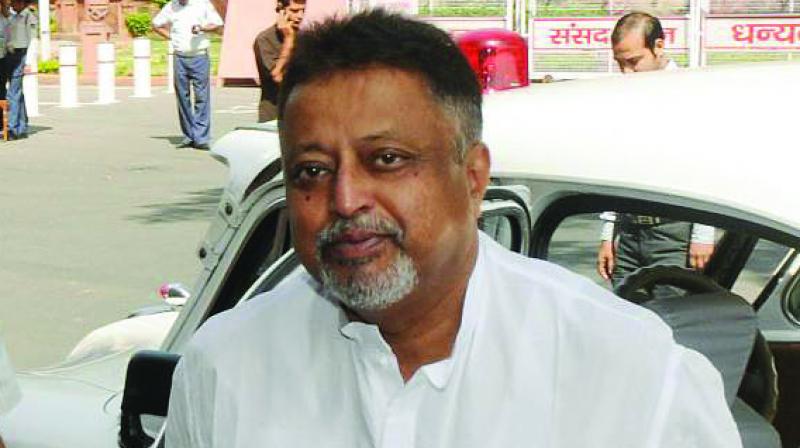 Kolkata: Senior BJP leader Mukul Roy and three others were booked in an FIR for murder by the police on Sunday over the killing of Krishnaganj’s Trinamul Congress MLA Satyajit Biswas at Hanskhali in Nadia. Two of the four accused — Sujit Mondal and Kartick Mondal — being local residents, were arrested by the police on Saturday night for their alleged role in firing on Biswas as he was sitting on a chair on the dais after inaugurating the Saraswati Puja in the evening.

The duo was seen fleeing by local residents from the venue on Majidpur Phulbari football ground after shooting Biswas from behind. The fourth accused is Abhijit Pandary. He is absconding. The quartet, including Mr Roy, face charges under Sections 302 (murder) and 120B (criminal conspiracy) IPC, along with charges under the Arms Act. Abhijit’s home was later ransacked by an angry mob.

Rejecting the Trinamul Congress’ allegations against him and the BJP for the murder, Mr Roy, a member of the BJP national executive committee, claimed: “The Trinamul has been torn apart by factional feuds. Let there be an impartial probe. I will face it. The murder of Biswas, a young MLA, is very sad. I condemn it. I and the BJP do not believe in the politics of killings.”

The slain MLA’s security guard Prabhas Mondal, who is a policeman and was on leave for the past couple of days, and the officer-in-charge of Hanskhali police station, Anindya Basu, were suspended for negligence. A departmental inquiry has been initiated against both of them. Mr Basu denied any negligence on his part, but admitted that he had been suspended.

Taking over the probe, the state criminal investigation department suspected that the MLA’s assailants had taken advantage of the fact that Mr Mondal was on leave. It found that power supply was interrupted at the venue at least 10 times between 7 pm and 8 pm, when Biswas was present. In the morning, Trinamul supremo and chief minister Mamata Banerjee called up Biswas’ widow Rupali and offered condolences.

Rupali Biswas said later: “The chief minister spoke to me. She assured me she was looking into it seriously, while an investigation is underway. She asked me not to worry.” Ms Biswas alleged her husband was killed over “political rivalry”.

Speaking on the progress of investigation, a senior police officer said: “So far, we have arrested two persons and detained three others. A country-made revolver used to shoot the MLA has also been recovered. It seems the victim was shot from behind and this was the result of a well-planned plot.”

Kartick’s wife, meanwhile, claimed her husband was not associated with the BJP. “Earlier, he was in Trinamul. He is yet to join the BJP. He has not attended any BJP rally so far. There was a feud between Satyada (the MLA) and my husband in the past. The MLA asked his men to beat my husband on the road. My husband returned home and told me he was assaulted for no fault of his. My husband was at home during the murder. He was working,” she said.

Sujit’s mother said her son had switched to the BJP from the Trinamul since his father’s death. “But I do not think he was involved in the murder. He works as a helper. He came home from the ground,” she said.

Accompanied by party MLA Mohua Maitra, Trinamul secretary-general Partha Chatterjee later visited Shaktinagar District Hospital where the slain MLA’s post-mortem was conducted. He said: “We have come to power in West Bengal at the cost of a lot of blood. Through her tireless efforts, the chief minister has restored peace in the state, and established harmony everywhere. Satyajit was very close to me. A few days ago, we spent a few hours together at home. I am speechless. The chief minister was shocked to hear of the murder. We have come here to pay our respects to our beloved colleague. Whoever has taken his life will not be spared.”

On Mr Roy’s name in the FIR, Mr Chatterjee, who is also the state education minister, said: “The case is at the administrative level. I will not comment on it. I will request the administration to punish the accused severely, irrespective of his political stature. I call upon our workers to not to be provoked. Development is our last word. It is the people who will stay with us. They have to be convinced how much the state will suffer if such a culture of politics will return.”