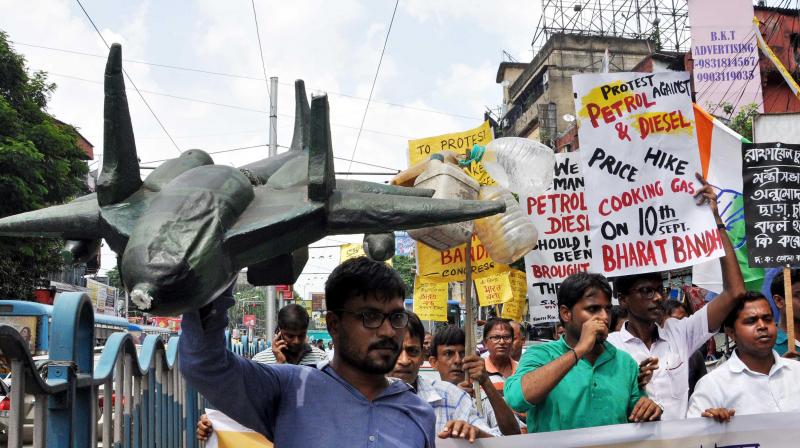 State Congress activists protest against petrol price hike, Rafale scam and other issues as the rally in support of the “Bharat Bandh” at Hazra crossing in Kolkata on Monday. (Photo: Abhijit Mukherjee)

Kolkata: With the Bharat Bandh evoking no response in West Bengal, the ruling Trinamool Congress (TMC) Monday said the state government did not allow normal life to be paralysed, while the CPI(M) termed the party as a supporter of the BJP government at the Centre.

Though the TMC supported the issues for which the bandh was called, TMC secretary general Partha Chatterjee said it opposed the shutdown to prevent loss of mandays and not to hamper the ongoing development process in the state.

Mr Chatterjee said the state government did not allow normal life to be paralysed during the “Bharat Bandh” hours. “Steps have been taken to keep alive normal life,” urban development minister Firhad Hakim said while leading a protest march at Entally area in Central part of the city.

CPI(M) state Secretary Surjya Kanta Mishra said there was no difference between the TMC and the BJP. “Both the parties are working together with a perfect understanding. The TMC’s stance on the bandh is just an example,” Mr Mishra said. West Bengal Pradesh Congress Committee president Adhir Chowdhury alleged that the TMC helped the BJP with its full support.

“The TMC workers and entire administration were deployed to foil the bandh and fulfill the purpose of the BJP,” Chowdhury claimed. State BJP president Dilip Ghosh, on the other hand, said, “The TMC is opposing the bandh. But actually it is trying to provide oxygen to the ailing Congress and the CPI(M).”

The TMC took out several rallies here to protest marches across the state against the increasing prices of petrol, diesel and cooking gas and the falling value of rupee.

Leading one such rally in the city, state PWD minister Arup Biswas said Chief Minister Mamata Banerjee has removed the term ‘bandh’ from the dictionary of West Bengal.

“The BJP must be dethroned in 2019 Parliamentary election. People will not allow Modi government to retain power after suffering enormously in everyday life,” said Banerjee, also the nephew of the chief minister.