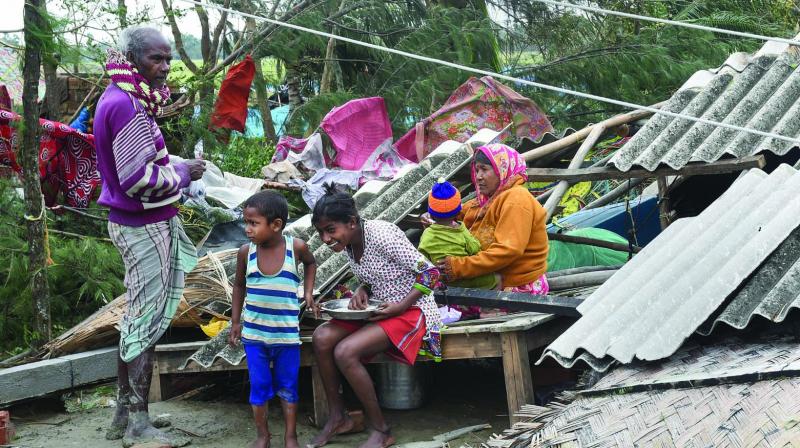 A family sits amongst the rubble of their house in the aftermath of cyclone Bulbul at Bakkhali in South 24 Parganas district of West Bengal on Sunday. (Photo: PTI)

Kolkata: Cyclone “Bulbul” has claimed at least 10 lives and affected as many as 2.73 lakh people in West Bengal after killing two people in Odisha on Saturday night. This has prompted chief minister Mamata Banerjee to postpone her tour to North Bengal. On Monday, she would go on an aerial survey of the worst-affected parts of Sundarban delta in South 24 Parganas followed up by a visit to another district North 24 Parganas to take stock of the damage.

West Bengal governor Jagdeep Dhankhar mourned the loss of lives. He also praised Ms Banerjee, her government and Central agencies for their efforts to tackle the cyclone. Five out of the ten deaths were reported in North 24 Parganas. One each happened in South 24 Parganas and East Midnapore. The victims in North 24 Parganas were Reba Biswas (47) and Moidul Gazi (60) of Basirhat, Suchitra Mondal (65) and Prakriti Mridha (60) of Hingalganj and Bideshi Sardar (56) of Sandeshkhali.

While Kamala Mondal died at Gosaba in South 24 Parganas, Sujata Das died at Nandigram in East Midnapore. Most of the deaths were due to either uprooting of trees or house collapse. On Sunday, Ms Banerjee tweeted, “Due to the severe cyclonic storm Bulbul, I have decided to postpone my North Bengal visit in the coming week. Instead, I would undertake an aerial survey of the affected areas around Namkhana and Bakkhali tomorrow.”

She added, “Later, I would take a meeting at Kakdwip with the administration to review relief and rehabilitation measures of the cyclone-affected people. I am also planning to visit the areas of Basirhat of North 24-Parganas on 13 November, 2019.” State disaster management minister Javed Ahmed Khan informed that around 2.73 lakh people were affected while 2,473 houses were totally destroyed in nine districts.

Out of the 2.73 lakh, 1.78 lakh people were accommodated in 471 relief camps and 373 temporary kitchens were to prepare food for the affected people. Around 46,000 tarpaulins were distributed even as 15,000 civic volunteers have been pressed into relief operations. In the evening, Mr Dhankhar tweeted, “In spite of great efforts by both the state and Central agencies, sad to hear of loss of lives due to Cyclone Bulbul in parts of West Bengal. Condolences to the bereaved families. Thoughts and prayers with fellow citizens who have been affected.”

Earlier he stated, “The directional efforts of the state government, its agencies as also Central outfits National Disaster Responsive Force, National Disaster Management Authority, Coast Guard, Navy and others have minimised the damage due to the cyclone, still there have been loss and damage. I greatly appreciate the synergy between these bodies.”

Mr Dhankhar said, “I appeal to NGOs also to come forward in this hour of need so that rehabilitation of the affected may be taken care of. I would seek to connect with the chief minister, who has been keeping a diligent watch, after she has made an aerial survey of the affected areas around Namkhana and Bakkhali as projected in media.”

He added, “A timely warning of the cyclone by Indian Meteorological Department also contributed to the preparedness of the agencies. The accurate and timely prediction by the IMD is indicative of the scientific skills the nation now possesses.”