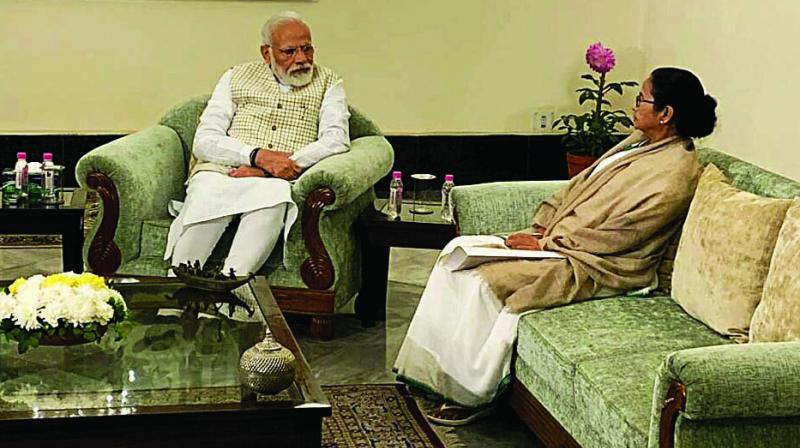 Kolkata: Prime Minister Narendra Modi met with West Bengal chief minister Mamata Banerjee on Saturday evening amid massive protests against the Citizenship (Amendment) Act, National Register of Citizens (NRC) and National Population Register (NPR) across Kolkata. At their meeting in Raj Bhavan, Ms Banerjee raised her fierce opposition to the CAA and NRC and demanded that they be withdrawn.

Due to several large protests across the city, including at the airport and along the route his convoy was to take, Mr Modi was forced to avoid travel by road twice.

Mr Modi, who is on a two-day official visit to the state, had to fly in an IAF chopper from the Kolkata airport to the Royal Calcutta Turf Club from where he entered the Raj Bhavan in his convoy.

Many demonstrators were waving black flags and flying gas-filled black balloons though the city as they shouted slogans against the CAA, the NRC and carried banners that said, “Go Back Modi.”

While several protests were organised by Left and Congress supporters, students, youth and various apolitical outfits were also out on the streets venting their anger against CAA and NRC.

After her meeting, Ms Banerjee said that she told the PM that Bengal is against citizenship law, NRC, NPR and that she had asked the PM to withdraw CAA and NRC as no person should be thrown out of the country or face any discrimination and torture.

Soon after her meeting she rushed to her party's dharna at Esplanade where she vowed to continue her movement to counter the allegation of the Left and Congress of her support to Mr Modi.

The state Congress has accused Ms Banerjee of having a tacit understanding with Mr Modi. “She boycotted the all-party meeting against citizenship law that Sonia Gandhi convened in Delhi on January 13 but fixed an appointment with Modi on January 11. Her real intentions are out in the open,” said Bengal Congress president Somen Mitra.

Mr Modi and Ms Banerjee’s one-to-one meeting was earlier likely to be held at 9 pm at Raj Bhavan. But it was brought forward due to a change in the PM's itinerary following Mr Modi's wish to stretch his visit to Belur Math, the headquarters of Ramakrishna Mission in Howrah, and spend the night there amidst speculation of his meditation on the occasion of youth icon Swami Vivekananda's birth anniversary on Sunday.

When Mr Modi reached Raj Bhavan in the afternoon, Ms Banerjee was already present there to greet him.

The Trinamul chief said, "Since the PM came on a visit to our state, it is my constitutional responsibility and also courtesy to meet him. I have told the PM, since you have come here as my guest, I do not know if I should tell you about it or not. We are against the CAA, NRC and NPR. A movement has been underway against the three across the country. We certainly want no discrimination among the people, no person be dropped out or faces any kind of torture."

She elaborated, "I have requested the PM to look into it. I also urged him to reconsider the CAA and NRC. We want these be withdrawn."

Ms Banerjee also asked Mr Modi to release around Rs 38,000 crore, including Rs 7,000 crore for damages due to Cyclone Bulbul, as dues from the Centre to her government. "He told me he would go through the letters regarding the state-matter. If needed, he would talk about it in New Delhi," she added.

Ms Banerjee later shared the dais with the PM and West Bengal Governor Jagdeep Dhankhar at the launch of the interactive light and sound show of Howrah Bridge at the Millenium Park by the Hooghly. After the event, Mr Modi sailed in a vessel to Belur Math across the river, avoiding a road journey due to the heavy protests against his stand on the CAA and NRC in the city since morning and continued till night with rallies.