47% candidates in Mamata’s list are women; party announces new names for seats it lost in 2014 election. 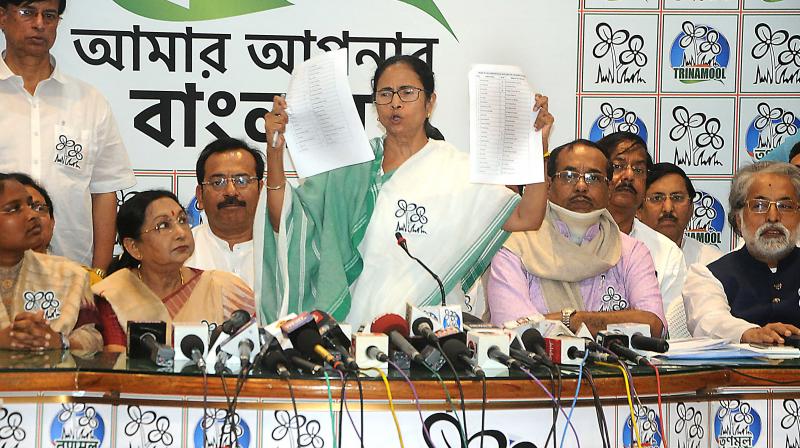 The development put an end to all speculations over the tempestuous Trinamul Congress supreme yielding any ground on her home turf to the prospective partners of the proposed ‘mahagathbandhan’, a grand alliance of anti-BJP parties, of which she has been one of the most vocal proponents.

She, however, did keep alive the idea when she said the Lok Sabha polls will sound the “death knell” for the BJP and the Modi government which will be replaced by a coalition dispensation of anti-BJP parties that will create more jobs, bring about peace and stability in Jammu and Kashmir and “freedom from the pervasive atmosphere of fear”.

The list, which is a mix of seasoned political players and greenhorns, has 17 women candidates, five more than the last elections, constituting roughly 41 per cent of the candidates.

Apart from replacing 10 sitting MPs, she announced the names of eight new candidates for seats the TMC had lost in 2014. Of the 42 seats in the state, TMC had won 34.

Besides TMC old timers, the list includes leaders and MLAs from the Left Front and the Congress who had switched over to her party in the last few years.

“Our list comprises both old and new, experienced and greenhorns. Today, we have announced our list for 2019 Lok Sabha candidates for Bengal and some other states. I am all the more happy and proud because 41percent of our candidates are women. Trinamuls list speaks for itself. Unity in diversity,” Ms Banerjee said.

The list includes seven candidates from the Muslim community, the bedrock of her support base, and 12 from the Scheduled Castes and Schedule Tribes. Muslims roughly form 30 percent of the state’s electorate.

The dropping of 10 sitting lawmakers and shifting of another to a new seat is being seen as an attempt to stem the infighting in the party.

Among senior leaders who were given the go-by or had “requested” Ms Banerjee to drop them, is the partys general secretary Mr Subrata Bakshi. Sitting MPs from seats like Coochbehar, Basirshat, Jhargram, Mednipur, Bolpur, Bishnupur and Krishnanagar were dropped. BJP made steady inroads in these places over the last five years, largely due to the infighting in the TMC.