‘UP, Assam govts shot protesters like dogs for vandalism’ 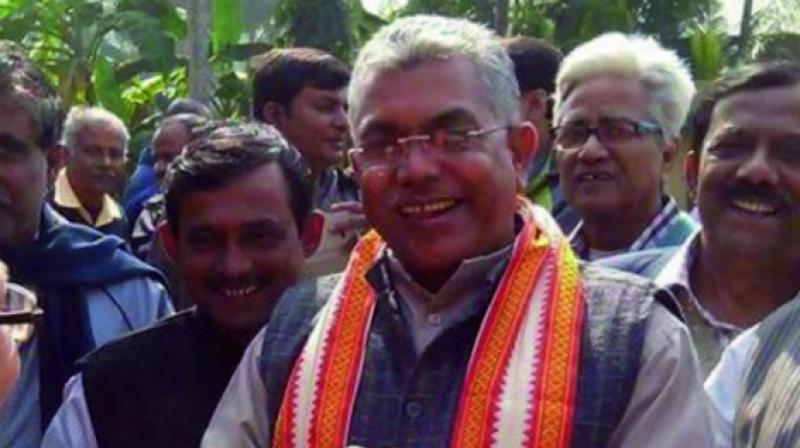 Kolkata: West Bengal BJP president and Midnapore MP Dilip Ghosh on Sunday evening ignited a political firestorm by threatening to “shoot” people to death “like dogs” in the state, the way the BJP-ruled state governments had done in Uttar Pradesh, Assam and Karnataka for destroying public property during prot-ests against the Citizenship (Amendment) Act and the National Register of Citizens.

Mr Ghosh also came down heavily on chief minister Mamata Banerjee “for not opening fire and ordering lathicharge” on those destroying railway property and public transport during the anti-CAA protests in the state in December last year.

Outraged by his explosive remarks, his party colleague and Union minister Babul Supriyo on Monday described them as “very irresponsible” while denying his claim on the UP, Assam and Karnataka governments.

“Very irresponsible of Dilip da to have said what he said… BJP, as a party has nothing to do with what a Dilip Ghosh may have said,” the Union Minister tweeted.

At a rally in Nadia on Sunday, Mr Ghosh said, “It is the money from my and your taxes which are utilised in running trains and buses and in building roads and railway tracks. But these properties are being destroyed. Are they spared because of being voters? Just see how our governments in Assam, Uttar Pradesh and Karnataka shot dead these shaitans like dogs and slapped cases on them, too.”

He added, “They come and live here and destroy properties also! Is it zamindari? We use lathicharge on them, shoot them and lock them in jails also. That is what our government did (in other states).”

The BJP MP further alleged, “Nearly a crore infiltrators are here. On whose money are they having the food? Whose money was wasted in the arson of trains and railway properties by them? It is mine and yours.”

Lashing out at chief minister Mamata Banerjee over her role during the statewide violence, Mr Ghosh claimed, “Nearly Rs 600 crores of properties were destroyed in West Bengal alone because neither firing was done nor a baton charge ordered. No FIR was lodged even. Didi’s police arrested no one. Why was no one arrested for the destruction of properties? Was it someone’s father’s property?” said the BJP leader.

Hitting out at Mr Ghosh, Mr Supriyo tweeted, “BJP, as a party, has nothing to do with what a DIlip Ghosh may have said. It is a figment of his imagination & BJP governments in UP, Assam have NEVER EVER resorted to shooting people for whatever reason whatsoever. Very irresponsible of DilipDa to have said what he said.” Undeterred by his attack, the state BJP chief maintained, “People speak like they understand something… I said what I felt what our governments had done. If we get chance, we will do the same also.”

Mr Mondal, the Trinamul Congress’ Birbhum district president, said, “The Centre must shoot Mr Ghosh to death first because if someone has destroyed property, it is him.”