Ms Banerjee also said that an elected chief minister should get “due respect”. 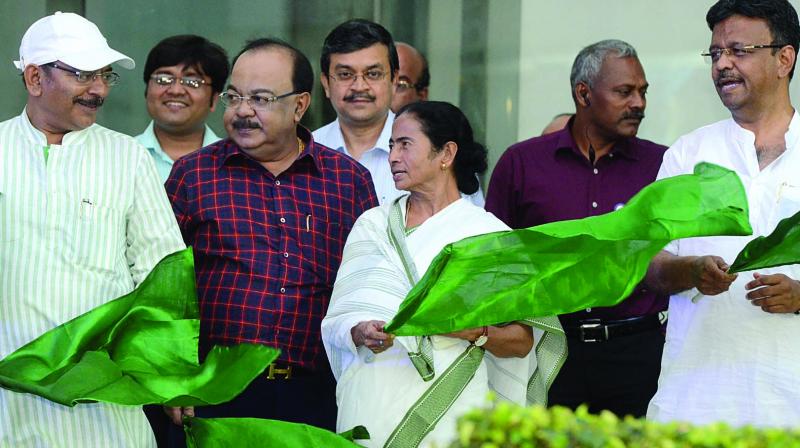 Kolkata: West Bengal chief minister Mamata Banerjee on Wednesday came out in support of her Delhi counterpart Arvind Kejriwal, holding sit-in at the L-G’s office to press for their demands.

Ms Banerjee also said that an elected chief minister should get “due respect”.

“@ArvindKejriwal, CM of Delhi is sitting in a dharna in LG’s office for the last few days in the capital city of the country. Elected CM must get due respect,” Ms Banerjee wrote on her Twitter handle this evening.

Mr Kejriwal, his deputy Manish Sisodia and two ministers—Gopal Rai and Satyendar Jain— had met L-G Anil Baijal on Monday evening and decided to stay put at his office till their demands, including a direction to IAS officers to end their “strike” and action against those who have struck work for “four months” were accepted.

The trio continued their dharna at the L-G’s office on Tuesday itself and Sisodia on Wednesday  began an indefinite hunger strike at the office of the Lt Governor, where chief minister Arvind Kejriwal and his cabinet colleagues spent the second night, a day after health minister Satyendar Jain sat on a hunger strike there to press for their demands.

The AAP government’s demands to the L-G include direction to IAS officers to end their “strike”, action against those who have struck work for “four months”.

It has also asked the L-G to approve the proposal for doorstep delivery of rations.

Ms Banerjee, who shares a cordial relation with Kejriwal went on to appeal to the Centre and the L-G’s office to resolve the problem immediately for the cause of the people.

“May I appeal to the Govt of India and @LtGovDelhi to resolve the problem immediately so that people do not suffer,” she added.