Mamata Banerjee’s nephew calls him ‘Chanakya made in China’. 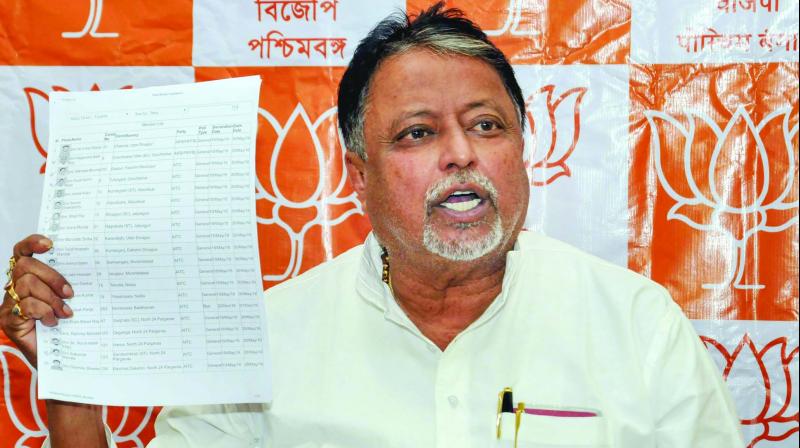 Kolkata: Giving a prelude of further defection from West Bengal chief minister Mamata Banerjee’s party, senior BJP leader Mukul Roy on Saturday claimed that 107 MLAs, mostly from the Trinamul Congress, have been all set to join the saffron party in the state.

He however did not reveal the names of the MLAs. Six Trinamul MLAs have defected to the BJP following their party’s poor performance in the Lok Sabha Election.

Mr Roy, who has been instrumental in leading the induction drive in the state, informed that the BJP has prepared the list of 107 lawmakers.

He underlined that those MLA have been in touch with the state BJP leadership.

Lashing out at Ms Banerjee, the BJP national executive committee member alleged, “She is now saying that she can not continue to run the government anymore. So she brought Prashant Kishor.”

He continued, “But does Mr Kishor hold any post or is he an advisor? He has claimed that he has received an amount from the Trinamul under the corporate social responsibilty fund. How can a political party run CSR fund? Companies have CSR funds. So has the Trinamul become a company?”

Hitting back at Mr Roy within few hours, Ms Banerjee’s nephew Abhishek Banerjee branded him as “Chanakya Made in China”.

He argued how Mr Roy made the tall claim when he failed to protect his own bastion in North 24 Parganas where the Trinamul has reclaimed two municipalities: Kanchrapara and Halisahar.

“I just saw him speaking about 107 MLAs’ induction to the BJP. But the reality is that he can not even protect the councillors in his neighbourhood. He should be ashamed of himself,” the two-time Trinamul MP of Diamond Harbour said.