Following Chowdhury’s announcement, the BJP also withdrew its 20 candidates who were contesting the polls. 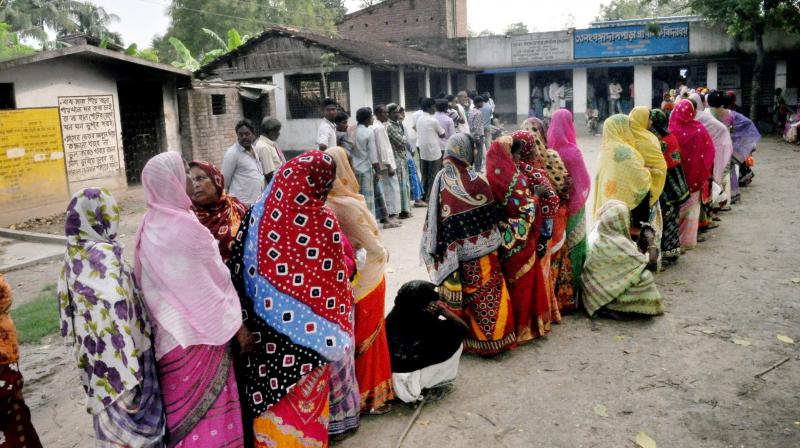 Voters stand in a queue to cast their votes at a polling station during municipal elections at Domkal, Murshidabad, on Sunday. (Photo:PTI)

Berhampore: The Congress and the BJP withdrew their candidates from the Domkal municipality election in Murshidabad on Sunday, accusing the Trinamul Congress of unleashing terror and carrying out massive rigging in the polls, which were marked by violence.

State Congress president Adhir Chowdhury alleged that votes were looted in broad daylight in the presence of the police, which forced the party to withdraw its candidates from the civic poll. “I asked all our 10 candidates in Domkal Municipal poll to withdraw themselves from contesting as the elections turned out to be a farce due to the booth rigging and violence by the Trinamul,” he said at a press meet in the morning.

Mr Chowdhury claimed that the Trinamul supporters forcibly drove out the Congress polling agents of the booths. The Congress MP also demanded repoll under the vigil of central paramilitary force. According to him, the polling at Raiganj and Pujali were also rigged. The Domkal Municipality has a board of 21 members. To fight the polls, the Congress forged an alliance with the CPI(M) and fielded 10 candidates while the CPI(M) fielded 11 candidates.

Following Mr Chowdhury’s announcement, the BJP also withdrew its 20 candidates who were contesting the polls.