MV SSL Kolkata was on its way to Kolkata from Krishnapatnam. 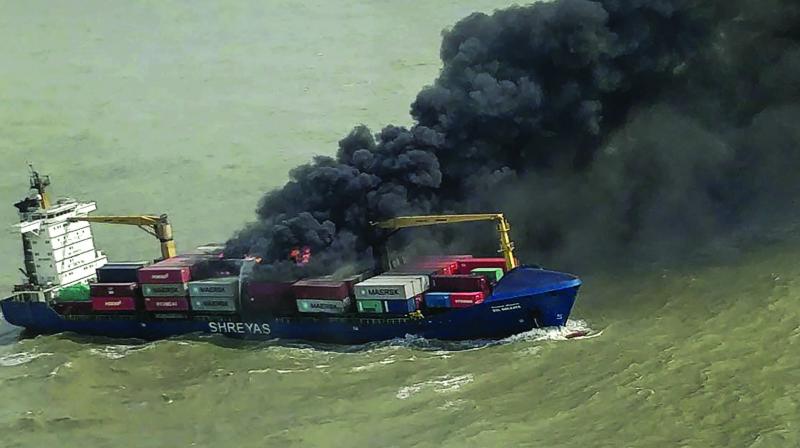 Dense smoke rises from the container carrier ship that caught fire at 55 Nautical Miles off the Sagar Island on Thursday. (Photo: PTI )

Kolkata: In a daredevil operation, the Indian Coast Guard (ICG) rescued all 22 crew members of a cargo ship, MV SSL Kolkata, that caught fire near Sand-heads in the Bay of Bengal at around Wednes-day midnight, braving a rough sea and stormy weather conditions.

The container vessel caught fire and went adrift about 55 nautical miles from Sandheads anchorage near the confluence of the Bay of Bengal and the Hooghly river.

ICG inspector-general (northeast region) Kuldip Singh Sheoran said, “All the 22 crew members who were on board to the vessel were rescued by us. They have been taken to Haldia.”

The merchant vessel, which is 148-metre-long, had 464 containers with 211MT of heavy fuel oil on board. It was coming to Kolkata from Krishnapatnam. The ICG received an information at around 11.29 pm on Wednesday from Maritime Rescue Coordination Centre (Chennai) about the fire on the Indian Flag Container vessel.

Indian Coast Guard Ship (ICGS) Rajkiran was mobilised from Haldia at 1.20 am on Thursday for necessary assistance immediately after receiving report of the fire.

An ICG Dornier aircraft was flown from Kolkata at 7.40 am for sea-air coordinated search and rescue operation.

KoPT tug Ocean Valour, having external fire fighting capability, was also mobilised, but the fire could not be controlled and the crew abandoned the vessel

According to the vessel-owner, the fire broke out due to an explosion in the lower hold and it spread to the containers on the main upper deck, the ICG said in a statement. “The fire initially spread to eight to ten containers. However, due to inclement and strong wind conditions the fire later developed into a major fire and rapidly spread to adjacent compartments,” it added.

Mr Sheoran, the ICG northeast regional commander, informed that ICGS Rajkiran reached the area at around 8 am on Thursday. On arrival, the ship and the aircraft found that around 70 per cent of the vessel was on fire.

To navigate the vessel to safe water and prevent the fire, the Master of the vessel was asked to take all necessary options on board. But inclement and strong wind helped the fire rapidly to turn into a devastating one as it extended up to more than 40 containers which was beyond the control of the ship’s crew.

The KoPT official said owners of the vessel have also been requested to arrange for salvage and pollution response vessels and equipment urgently. The authorities concerned of the West Bengal government have also been appraised. “We are also seeking assistance of National Remote Sensing Centre for tracking of oil slick in the event of spillage,” he said.

The Navy had also despatched a Sea king 42C helicopter and a Dornier aircraft from Vizag at daybreak to assist in the search and rescue operation, but were informed while airborne that the container ship was located and rescue operation had been initiated by the Coast Guard vessel, a defence official said.