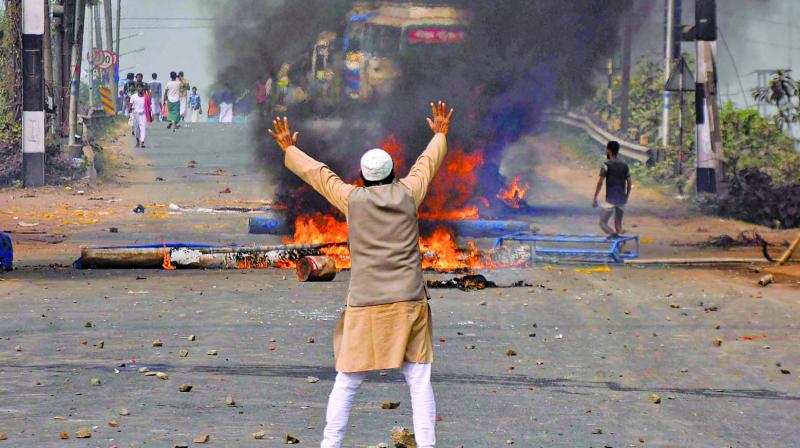 A man during a protest against the passing of Citizenship Amendment Bill (CAB) at Sanmtragachi in Howrah district of West Bengal. (Photo: PTI)

Kolkata: The Narendra Modi government is likely to take a “hard decision”, similar to the Citizenship (Amendment) Bill and abrogation of Article 370 of the Constitution, to neutralise the Left Wing Extremism (LWE) as part of its aim to solve internal conflicts of the country in its second term. General officer commanding-in-chief of the eastern command Lieutenant General Anil Chauhan indicated this on Saturday.

“As far as the Indian security scenerio is concerned, the current government is keen to take hard decisions which have been pending for a very long time. In the first year of its second term, we have already seen Article 370 revoked and Jammu and Kashmir state has been bifurcated into two,” he said.

Lt. Gen Chauhan elaborated, “The government is keen to conclude the talks with the Nagas which have been going on for a long time. They are primarily assessing its impact on Arunachal Pradesh and Manipur before taking a call on this. Yesterday you have seen the CAB has been passed despite reservations expressed by couple of northeastern states.”

He added, “It would not be hard to guess that some hard decisions in respect of the Left Wing Extremism (LWE) may also be on the card after this. So the internal security environment is a very challenging one.”

The Eastern Army Commander however observed that the present economic scenerio has not been robust to the high-cost defence expenditures for modernisation of the armed forces.

"Although the present state of economy does not look very bright to undertake any high-end defence expenditure, the government however have to provide funds both for modernisation and sustainance of the army," he said. Lt Gen Chauhan informed that the Eastern Command's focus areas of procurement would be met by the special budget under the Army Commander's Special Financial Powers.