The newly-inducted “Medha” rake manufactured by the Integral Coach Factory (ICF) in Perumbur was withdrawn from operation. 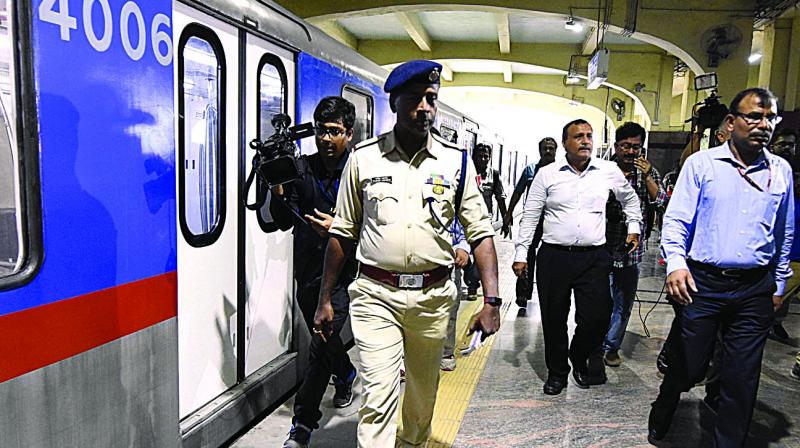 Commissioner of Railway Safety, Metro Division G.P. Garg (R) along with other officials inspects the Park Street Metro station where one person died in an accident on July 13, on Monday in Kolkata. (Photo: Abhijit Mukherjee)

Kolkata: A day after registering a case, the Kolkata police has decided to set up a special investigation team (SIT) to probe the death of an aged metro passenger: Sajal Kanjilal in an accident last week which has brought the Kolkata Metro Railway under scanner over the allegations of negligence.

On Monday morning, the city police has sent a letter to the Kolkata Metro Railway headquarters at Metro Bhavan seeking the CCTV footage of the accident and information about how the 66-year-old resident of Bosepukur was killed on July 13 evening when he was trying to board a coach of the metro but failed as his hand got stuck on the door before the metro started moving ahead dragging him to death.

The police wants to know the role of those metro staff on duty at the Park Street station where the accident took place. Meanwhile, Commissioner of Railway Safety (Metro Circle) G.P. Garg inspected the Park Street metro station and the rake which has been kept at Tollygunge.

The newly-inducted “Medha” rake manufactured by the Integral Coach Factory (ICF) in Perumbur was withdrawn from operation.

The ICF delivered five “Medha” rakes to the Kolkata Metro Railway in a staggered manner since 2017.

Out the five two were inducted in service in April this year after a gap of 20 months. Mr Garg assured of a thorough probe at the highest level.

“It will take some time to ascertain the cause of the accident,” he said. Mr Garg also held a meeting with Kolkata Metro general manager P.C. Sharma. He visited the Noapara car-shed where maintenance work of the metro trains is conducted. Kolkata Metro Railway spokesperson Indrani Banerjee informed that Mr Garg would formally kickstart his investigation into the accident on July 18.