The GJM activists also pelted stones at a bus and ransacked several shops, which tried to reopen. 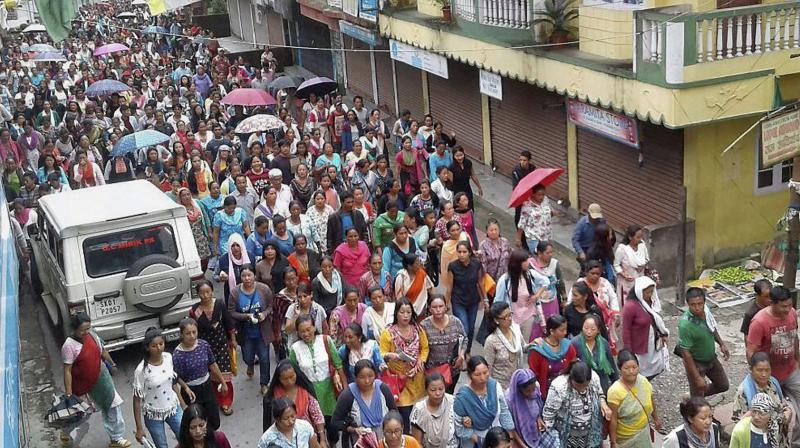 Darjeeling: Gorkha Janmukti Morcha supporters on Friday clashed with police after pro-Gorkhaland supporters attacked a school bus and ransacked several shops in Kalimpong district of the Hills, the police said.

The incident took place when Gorkha Janmukti Morcha supporters, who were picketing on the streets of Kalimpong to enforce the indefinite shutdown which entered its 93rd day on Friday, tried to stop a school bus.

The Gorkha Janmukti Morcha supporters pelted stones at the bus and ransacked several shops which tried to reopen on Friday, the police said.

The police had initially tried to pacify the Gorkha Janmukti Morcha supporters, but they pelted stones at the police injuring few police personnel. The police and security forces were patrolling the streets to avoid any untoward incident.

Several shops and markets which had reopened in Kalimpong on Thursday downed its shutters.

Gorkha Janmukti Morcha chief Bimal Gurung had on Thursday asked partymen to intensify the bandh and said the shutdown will continue till a tripartite meeting was convened by the central government.

He had also asked the Gorkha Janmukti Morcha cadre to intensify the bandh in the Hills and ensure that no one made an attempt to break it.

Though the state-run North Bengal State Transport Corporation plied a few buses, they were escorted by security personnel.

The buses were operating from Siliguri to Darjeeling via Kurseong. Buses were also plying between Siliguri and Mirik in the Darjeeling district, official sources said.

For the seventh day in a row, the police, along with the administration, appealed to the locals via public address systems to open shops and restore normalcy in the Hills. Peace rallies were taken out by residents in Kurseong, Darjeeling and Mirik.

The Gorkha Janmukti Morcha supporters took out rallies in some parts of Darjeeling, Sonada and Kalimpong supporting the creation of Gorkhaland and the ongoing shutdown, the sources said.