Country didn’t face such a crisis even during emergency, says CM. 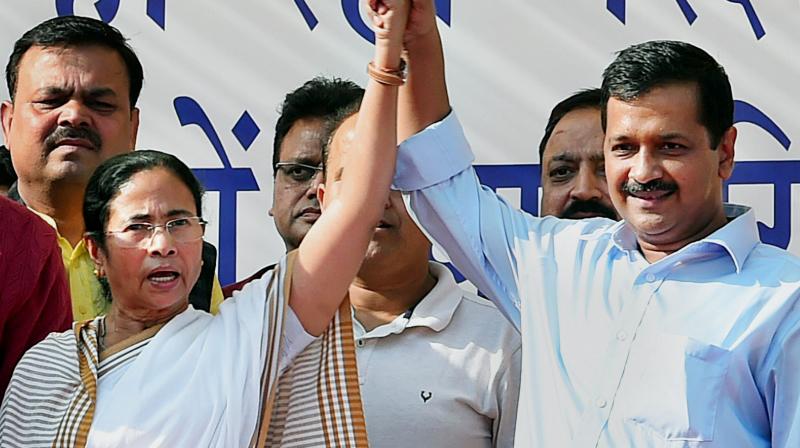 New Delhi: A day after her march to the President’s House, Trinamool Congress (TMC) chief Mamata Banerjee along with Delhi chief minister Arvind Kejriwal, hit the streets of the national capital demanding a rollback of the demonetisation exercise within three days, a move seen by many as an attempt to explore a federal front against the Modi government.

Ms Banerjee had very few supporters in her march to Rashtrapati Bhawan on Wednesday with major opposition parties, like Congress, Left, and the JD(U) staying away from her march, which was her singular initiative.

Both the Left and Congress are arch rivals of the Trinamul in West Bengal and did not want to be seen on a common platform with TMC, which is being led by Ms Banerjee.

Ms Banerjee and Mr Kejriwal demanded a complete rollback of the exercise within three days, failing which, they warned of a revolt by the people of the country.

The government was, however, quick to dismiss the demands for a rollback.

Finance minister Arun Jaitley said that there is no question of rollback of the demonetisation policy. He also added that the rush of customers at banks is steadily
decreasing with each passing day.

Both Mr Kejriwal and Ms Banerjee, in their trademark styles, first assembled at the Azadpur Mandi, Asia’s largest wholesale market, which is said to have been hit the hardest by the cash crunch, and then knocked at the doors of the Parliament by plonking themselves in front of the Reserve Bank of India.

True to the street-fighting styles of the two parties, their supporters chanted anti-PM slogans and brought traffic to a halt in the crucial intersection. The process of exchanging money at the bank was also affected after the visit by the two leaders.

Ms Banerjee said that they had gone to the RBI to see whether the Centre had enough currency or not. “Our main apprehension is shortage of currency. We are here to check whether there is enough cash to disburse among the people,” she said.

She also said that the country had not witnessed such a crisis even during emergency. It is a fight to “save the country, a fight for the poor and hungry people. This decision may take the country 100 years back. The government is coming out with a different decision every day.”

“The day before yesterday it was said that the limit for exchange is Rs 4,500, today you say it is Rs 2,000. The other day it was said indelible ink will have to be put on fingers. What is going on? Are we servants, are we thieves and you are honest. Is everybody a thief?” she said. She was dismissive of the demand of Opposition parties to set up a Joint Parliamentary

Committee to probe demonetisation, saying such committees constituted in the past to investigate various issues did not yield any result.

Mr Kejriwal tweeted: “How much currency needed? How much printed? What is capacity? How many more days will it take? Myself and Mamtadi at RBI to get this information.”Addressing the rally, he said that as a result of the demonetisation exercise, black money was flooding the market again.