She left the national capital in the afternoon and arrived here around 4.45 pm. 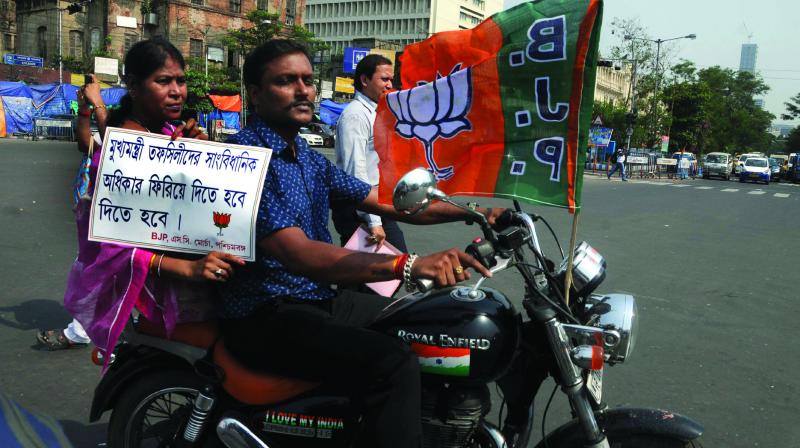 Activists of state BJP’s SC/ST Morcha during a rally against the state government’s failure to protect the SC/ST rights on Monday. (Photo: Asian Age)

Kolkata: Slamming the BJP for raising slogans in Delhi against the West Bengal government and chief minister Mamata Banerjee, the ruling Trinamul Congress (TMC) on Monday said the saffron party wants to “disturb peace and stability”.

Ms Banerjee, who is also the TMC chief, was in Delhi to attend the Niti Aayog Governing Council meet.

She left the national capital in the afternoon and arrived here around 4.45 pm.

The BJP “doesn’t have a place in people’s heart” here and leaders from Bengal had to go to another state for cheap publicity, TMC secretary general Partha Chatterjee said.

“Why do they (BJP leaders) need to go to another state?  Just for the sake of cheap publicity. The BJP is a party which is believes in dividing people on religious and caste lines,” he told reporters.

The saffron party’s Delhi unit, along with leaders from Bengal, staged a protest this morning against the alleged killing of two of its party workers and the “deteriorating law and order situation” in the state.

“There is no law and order in the state (Bengal). People are scared to come out of their houses. The Trinamul Congress has recently murdered two of our workers and the police are trying to cover it up, saying they committed suicide,” Ms Ganguly, a BJP MP from West Bengal, said.

Countering her claims, Chatterjee asserted that the BJP’s “only aim” was to malign the TMC and capture power in West Bengal. “The BJP has been unsuccessful in gaining ground in Bengal in the past, they would fail again in the days to come,” he added.      — PTI