Man back home after hours in queue, dies of heart attack

He died due to stress and exhaustion in queueing up for three days at a stretch. 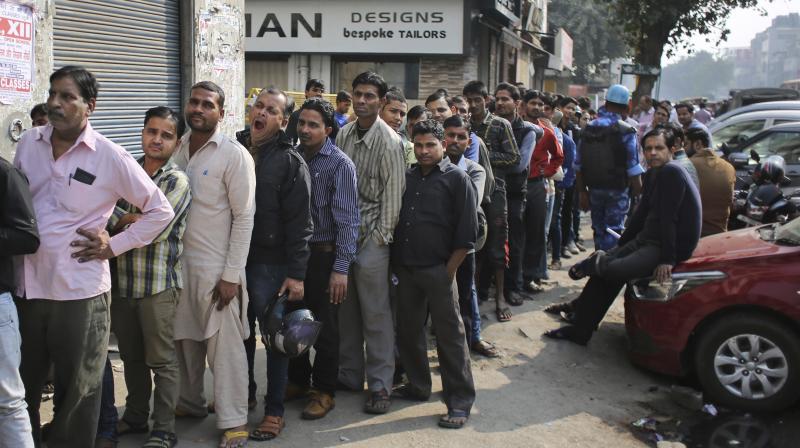 People wait in a queue to deposit and exchange discontinued currency notes outside a bank in New Delhi. (Photo: PTI)

Kolkata: A 46-year-old man allegedly died an hour after  he returned home waiting in the queue for hours to exchange notes at Rajabagan area under Metiaburz police station area on Friday morning.  The deceased Sk Islamuddin- a garment trader had stood in the queue for hours since Thursday night returned home and felt a severe pain in his chest following which he died.

His relatives and neighbours alleged that this untimely death was because he had to stand fruitlessly in the queue all through the night for the last three days.  He suddenly fell sick at around 7 am while in the line of a nationalised bank branch and told his son Imran to stand in the queue and walked back home which was not too far. He complained of a chest pain and soon fell motionless. A doctor was called who told me that he has expired,” a family member said  adding that he has been standing in the queue to exchange notes for long hours in the last three days too.

The death certificate of Islamuddin stated that he died of a massive heart attack following severe chest pain and sweating heavily leading to cardio-respiratory arrest. He died due to stress and exhaustion in queueing up for three days at a stretch. Many of the small traders here are doing this. The decision of demonetisation has been inhuman,” one of his neighbours Rahamat Ali  said.  A senior police officer of the port division said,” There has been no official complaint. But  If this happens,  then it is really unfortunate.”

Meanwhile, another death was reported from Malda where a farmer Gobindo Naskar committed suicide by hanging. “ He has been going for exchanging notes but was unable to do it because of long queue. He was so depressed that he committed suicide,” one of his family member alleged.