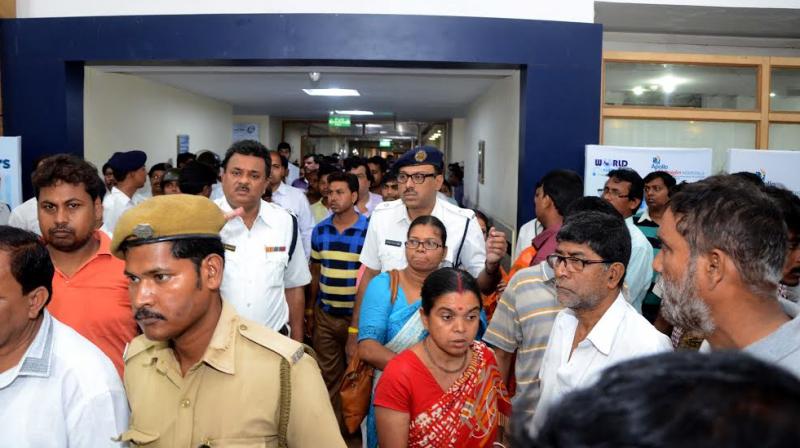 Kolkata: Within two months of Sanjoy Roy’s death due to medical negligence, Apollo Gleneagles Hospital has once again come in the eye of storm following the death of a newborn on Wednesday.

Angry family members of the four-month-old baby, Kuheli Chakraborty, went on a rampage at the private hospital off EM Bypass triggering panic among other patients, doctors and hospital officials.

They alleged that the baby, daughter of Abhijit and Shalu Chakraborty in Thakurpukur, died due to overdose of anaesthesia at around 7.50 am on Wednesday. The situation was brought under control after a heavy police force was deployed at the hospital.

On April 15, Kuheli was admitted for colonoscopy to the emergency department of Apollo with complaints of unresolved blood-in-stool after being referred from ESI Hospital. Mr Chakraborty alleged, “No doctor attended my daughter on that day.” Apollo, however, stated that during the colonoscopy the baby suffered a cardiac arrest and was put on ventilator.

According to the private hospital, it tried to revive her. Its statement said, “However, a second cardiac arrest occurred this morning from which she was not able to be resuscitated.”

It added, “Apollo Gleneagles Hospitals along with its entire staff and personnel offer our deepest condolences to the bereaved Chakraborty family. The sad demise of the 4-month-old baby of Mrs Shalu Chakraborty is extremely unfortunate despite our best efforts and after providing the best medical support in the given condition.” A complaint was lodged by the baby’s family at the Phoolbagan police station against an anaesthetist and other doctors. “Our baby was brought here for colonoscopy... She was not ill. But the doctors have murdered her. We want justice,” Ms Chakraborty, mother of the deceased baby, said.

Additional commissioner of police (III) Supratim Sarkar said, “A case under Section 304A of the Indian Penal Code has been registered. Post-mortem was done at Nil Ratan Sircar Medical College and Hospital.”

Waking up to the incident the state health department summoned Apollo CEO Rana Dasgupta to Swasthya Bhavan in Salt Lake and directed him to appear with all the documents on Thursday.

In February Apollo came in dock for allegedly delaying to shift a patient: Sanjoy Roy to SSKM Hospital over due medical bills which ultimately led to his death.