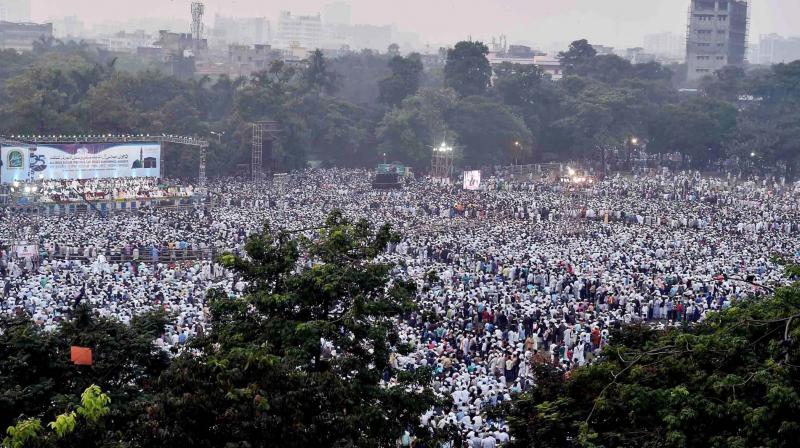 A huge crowd at the All India Muslim Personal Law Board meeting on Sunday. (Photo: PTI)

Kolkata: The All India Muslim Personal Law Board (AIMPLB) on Sunday adopted resolution supporting the triple talaq and accused the BJP of infringing into the personal laws of Muslims by following its political manifesto in which it had pledged to implement Uniform Civil Code upon coming to power.

Zafaryab Jilani, secretary, AIMPLB, said the Modi government’s decision was intended to gain political dividends ahead of the crucial election in Uttar Pradesh. “Most of the electoral promises made by this government before coming to power have remained unfulfilled and that’s why Modi is raising such topics to divert public attention  from the issues at hand. It is a Modi vs secularism issue,” he said.

Addressing a huge gathering at AIMPLB’s 25th conference at Park Circus Maidan, TMC cabinet minister Siddiqullah Chowdhury appealed to the secular forces of all states to make their stand against Uniform Civil Code clear. He said West Bengal chief minister Mamata Banerjee has already made done that. “We had a core committee meeting at the CM’s residence. She said the Centre had written to her and sought her opinion on Uniform civil Code. She said she told them that her government is against any such code,” he said.

TMC MP Sultan Ahmed, who is also a member of AIMPLB, said the wave of protest being witnessed in Kolkata would soon spread across the country.

AIMPLB has decided to form a women’s wing to look into issues such as  women issues  such as talaq, family issues, education and other issues. It will also start  an all India Muslim women helpline, a toll free call center in Urdu, English and 8 regional languages to counsel and guide Muslim women having family disputes to go to the Darul-Qaza.