Mr Dhankar also complained that he found no senior police officer to receive him. 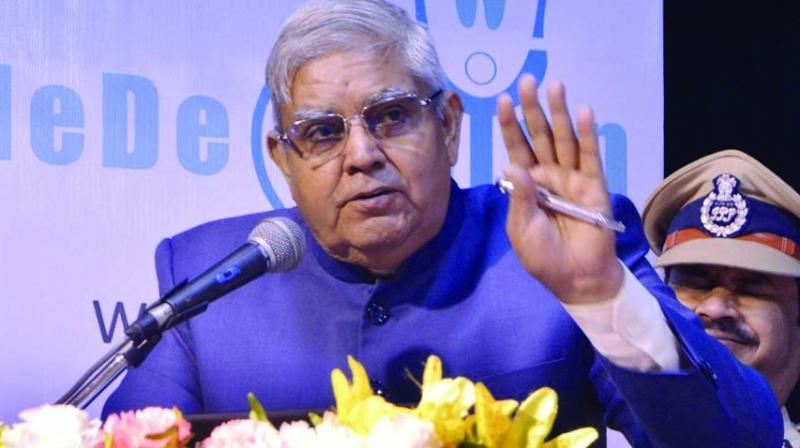 Berhampore/Kolkata: Governor Jagdeep Dhankar, who faced angry protests allegedly by the Trinamul Congress supporters showing him black flags and shouting ‘Go Back’ slogan in Murshidabad on Wednesday, expressed his anguish openly for not getting a helicopter in sharp contrast to CM Mamata Banerjee. He even observed that Ms Banerjee should curb the use of helicopter.

Mr Dhankar also complained that he found no senior police officer to receive him. On the way to Domkal in Murshidabad to attend an event, he said at Krishnanagar in Nadia, “In view of the distance, the Raj Bhavan considered it right that a demand of a helicopter should be made to the state government. But, the state government creates obstruction on one pretext or the other when it comes to providing a helicopter.”

The governor observed, “I do not see this as a satisfactory attitude. It is not a positive attitude. Around this time, the CM is availing of a helicopter. I do not have any objection to it. She should utilise it. But she also has a responsibility as a democratically elected CM and face of the state to put a check on such movements. I think this is a must. It is my privilege to come here.”

He added, “I, however, came to know that the CM visited here last time flying in a helicopter. It is being said that I am running parallel administration. Now, I am asking you if I were running parallel administration, shouldn’t there be any officer from the police? Are you surprised to not to find any? You have seen a total absence by them.” The governor noted, “This is a trival matter. All have to work in coordination together according to the Indian Constitution. I find it wrong to bring politics into each and every issue.  As a governor, I can appeal, please believe in rule of law, believe in the Indian Constitution.”