The CID has also got evidence which suggests that four doctors in Jalpaiguri may have been involved in the trafficking racket. 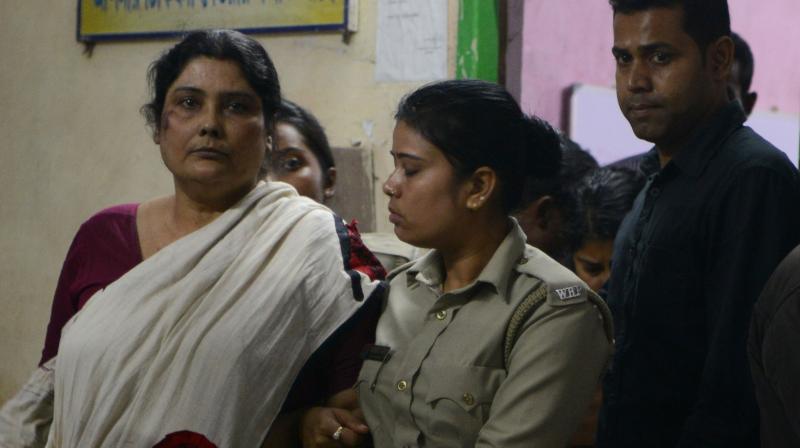 A policewoman escorts Chandana Chakraborty from a police station in Jalpaiguri on Tuesday, for a medical check-up to a hospital after her arrest as part of an alleged child trafficking scandal. (Photo: AFP)

Kolkata: A district child protection officer based in Jalpaiguri has come under the scanner of the state CID, which is probing the baby trafficking racket that was cracked in November 2016. Jalpaiguri district magistrate Rachana Bhagat has already sent a showcause notice to the officer, Sashmita Ghosh, and has directed her to reply within 24 hours.

The CID has also got evidence which suggests that four doctors in Jalpaiguri may have been involved in the trafficking racket. “We are collecting more evidence against them,” a CID investigator said.

The CID sleuths had learnt that Ms Ghosh had a close relationship with school-teacher Chandana Chakraborty, who also ran an adoption agency. The CID had arrested Ms Chakraborty on Saturday.

The sleuths are also considering the lavish lifestyle of Ms Ghosh in their probe as they have information that her husband owns a luxurious car.

Ms Ghosh, however, ruled out her involvement in the racket and claimed that she was ready to face a CID probe as she has done nothing wrong. “I will surely answer to the showcause of the DM,” she said. She denied having a luxurious car and claimed that she had an old ambassador belonging to the family. “My husband rides a two-wheeler,” she added.

The CID is also keeping an eye on the activities of a BJP leader from North Bengal, Juhi Chowdhury, who had lobbied for the renewal of Ms Chakraborty’s agency in New Delhi and also financially benefitted from the sale of newborns through her agency to couples outside the country for hefty amounts. The sleuths have got a Rajdhani Express ticket, suggesting that Ms Chakraborty, along with Ms Chowdhury, were scheduled to travel to Delhi on February 21. However, the journey was foiled following Ms Chakraborty’s arrest on Saturday.

“Ms Chowdhury, who is the general secretary of state BJP women’s wing. was influential as we have got information that she had access to North Block in Delhi. She had visited the North Block along with the arrested accused Chandana on February 10,” a CID slueth said.