Over 1 lakh examinees had arrived to appear for examinations for Group D posts conducted by the Bengal government. 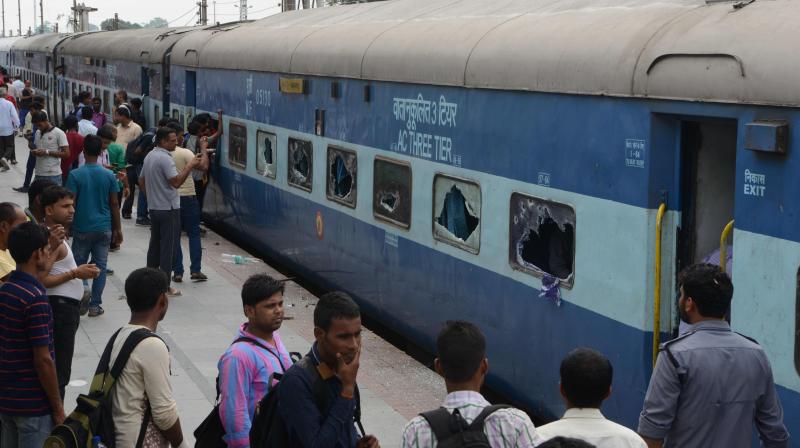 Passengers stand next to a train that was vandalised by students at New Jalpaiguri railway station in Siliguri. (Photo: AFP)

Kolkata: Inability on the part of North Frontier Railways in arranging a train for the return journey of a number of examinees triggered violence at New Jalpaiguri station on Sunday morning. Irate examinees went on a rampage, ransacking the station master’s office, damaging an engine and two AC coaches and tried to set fire to the station.

According to sources in the NF railway, over one lakh examinees from Bihar had arrived there on Saturday to appear for the examinations for Group-D posts conducted by the Bengal government at various centres in north Bengal. They were headed for home from New Jalpaiguri, but there were no trains available for the return journey.

“When we approached the station master and asked him to make arrangements to stay overnight at the station, we were chased away by the RPF,” one of the candidates alleged.

The agitated examinees went on a rampage Sunday morning. They ransacked several platforms and the station master’s office, burnt tyres on the tracks. They even blocked the Awadh-Assam Express, damaged its engine and two AC coaches The RPF, along with the NJP police, brought the situation under control and the agitation was lifted at around 11 am.

“The damage to railway property was estimated at Rs 1 crore. An FIR has been initiated against the agitators,” an official said. Several superfast and long distance trains, including Awadh-Assam express and Sealdah-Kamakhya Express, were held up as a result of the agitation. The agitation was lifted at around 11 am Sunday after the railways provided a special train to transport the examinees to Bihar.