Mamata vows to win all 42 LS seats in Bengal 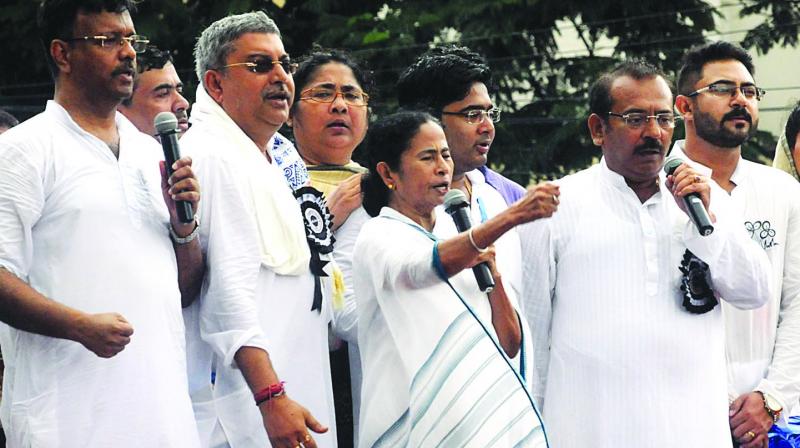 Kolkata: Vowing to win all of the 42 seats in West Bengal in Lok Sabha elections next year Trinamul Congress supremo Mamata Banerjee on Saturday announced of inviting UPA chairperson Sonia Gandhi and leaders of other Opposition parties to a grand rally at Brigade Parade ground on January 19 in her desperate bid to strengthen her call for Federal Front to oust the BJP from power at the Centre.

According to her, the BJP has started losing its allies in the NDA fold. Predicting the BJP’s ouster the West Bengal chief minister doubted if it would get the single largest majority in next LS polls.

Addressing Shahid Dibas (Martyrs’ Day) rally she said, “Our pledge of July 21 this year, which is its 25th anniversary, is we will win 42 seats out of 42 with the people’s vote. In the coming days Bengal will show India the way. In future we will show the path in Parliament taking people from all walks of life.”

She elaborated, “We will kickstart preparations for Brigade rally from November. More crowd than that of July 21 rally has to be pulled there.  Ahead the LS Elections the call for winning 2019 and the central government will be made on January 19 from the Brigade. We will undertake it with all the political parties organising Federal Front. I will bring all the leaders from across the country to project: Bengal will show the way, you join us. Bengal is with you.”

Ms Banerjee underlined, “All will be invited. But we are not after chair. We care for the people.” After the rally, she told the media that Ms Sonia Gandhi and CPI(M) leaders would be invited at the Brigade.

Downplaying Modi government win against the no-confidence motion in the Parliament Ms Banerjee argued, “They are now claiming they would prove their mettle in 2024, not in 2019. Let them pass the test in 2019. After that 2024 will come.”

She reasoned, “What was the margin they won by on Friday? They got 325 votes against 126 of the opposition.”

The BJP does not have the single largest majority. Their allies like Shiv Sena did not vote for them. They got the votes from the AIADMK of which Jayalalithaa was the leader. Had she been alive, the BJP would not have got these votes and they would have lost. They have 325 seats now. I doubt if it would cross 100 next year. They will get 150 maximum. But they will not get the majority.”

She pointed out, “In the coming days the AIADMK would not get even a single seat in Tamil Nadu. Only Stalin will get it. So the entire tally will be minus BJP. In Uttar Pradesh the BJP got 80 seats. If Mulayam and Mayawati join hands with each other, they will get 30 seats at least. In Madhya Pradesh they will now get one fourth of all the seats they got. I doubt if they would at all get five seats this time in Rajasthan where they got 25. In Gujarat they will get a zero. And in Bihar Laluji will take control.”

Discounting Prime Minister Narendra Modi’s hope about the BJP coming to power in West Bengal like it did in Tripura Ms Banerjee added, “Tripura formula will not work here. The CPI(M) had rotten there. We built up everything. But the Congress workers switched to the BJP which spent crores to grab the state.”

She also bantered the BJP for the canopy collapse during Mr Modi’s rally in Midnapore.

“How will those who can not even build a pandal, build the nation? On July 28 we also will hold a rally at the same venue.”

Comparing the present BJP leadership with two world leaders: Hitler and Mussolini and Talibans, chief minister Banerjee told the rally, “Coming to power in India they are dictating more audaciously than Hitler and Mussolini. Those who have blood in their hands are running the country. They are now giving sermons. Do not tolerate them. I have no oppositon with the old timers of the BJP who are not like the Talibans who rule the country now.”

She also tore into the BJP over the incidents of farmer suicides, lynching and encounters.