TMC holds RSS, BJP responsible, says no one will be spared 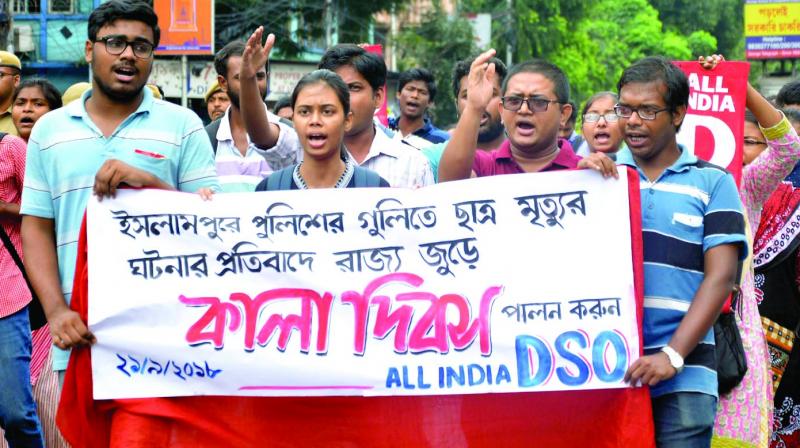 AIDSO, student front of SUCI(C), takes out a rally at Moulali in Kolkata on Friday against the death of a student in police firing in Islampur. (Photo: Abhijit Mukherjee)

Raiganj: A college student, injured in a clash between a mob and the police in North Dinajpur, died Friday, pushing the death toll to two. The BJP observed a 12-hour bandh in the district over the incident on Friday.

Locals alleged that the two students were killed in police firing but the SP of North Dinajpur, Sum-nit Kumar, said the police did not open fire.

The SP, however, admitted that the deceased students had received bullet injuries and said the police were investigating who fired the gunshots. Kumar said people in the mob were carrying illegal arms and bombs, and 14 police constables were injured in the clash. He said seven people, including some BJP supporters, were detained in connection with the incident.

Both Barman and Sarkar were area residents and former students of Darib-hit High School in Islampur area. Trouble brewed over recruitment of Urdu teachers for the school as students said they needed science and english teachers.

The students and area residents stopped three newly-recruited Urdu tea-chers from entering the school Thursday, demanding that all vacant teaching posts be filled.

The BJP had called a 12-hour bandh from 6 am in North Dinajpur district Friday. Schools, colleges and other education institutions were closed in the affected area.

Train services, however, remained unaffected. The ruling Trinamul Congr-ess and the Opposition BJP traded charges over the incident.

“The RSS is bringing outsiders and indulging in politics there. The RSS or the BJP, whoever is responsible (for the incident) will not be spared,” Education Minister and TMC leader Partha Chatt-erjee said in Kolkata.

State BJP president Dilip Ghosh said, “The TMC is seeing the ghost of RSS in everything. They should self-introspect and perform their duty. The police have opened fire on students which is not desirable.”

He demanded a CBI probe into the incident. When the school needed teachers of mathematics and other subjects, Urdu teachers were recruited, he claimed.

Officials of Daribhit High School, requesting anonymity, said the school did not seek any Urdu teacher and it does not have any Urdu speaking student.

Meanwhile, the education department suspended the District Inspector of Schools of North Dinaj-pur, Rabindranath Mo-ndal, in view of the appointment of Urdu teachers.

Sources in the district inspector’s office, however, said the appointments were made by the department and not by the DI.

Islampur MLA and chairman of Islampur Municipality Kanhaiya Agarwal said he had advised the headmaster not to let the three teachers join the school till the issue was resolved.