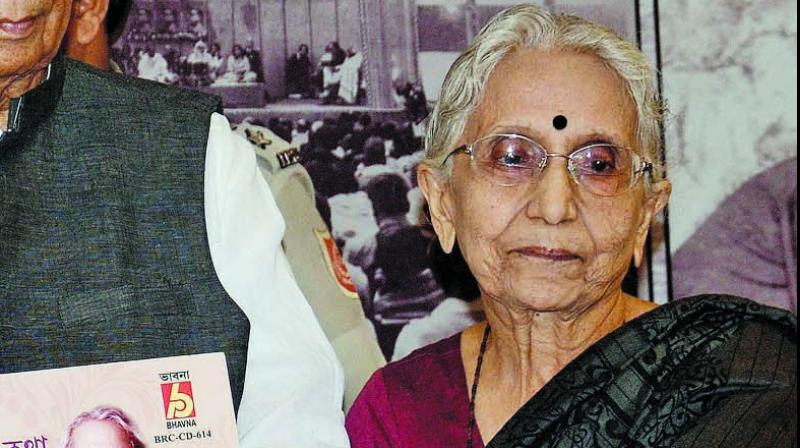 Kolkata: Former Trinamul Congress MP Krishna Bose died at a private hospital due to age-related ailments on Saturday morning. She was 89. Bose was the wife of Sisir Kumar Bose, nephew of freedom fighter Netaji Subhas Chandra Bose. She is survived by her two sons — Sugata Bose, also a former Trinamul MP and Sumantra Bose — and a daughter Sharmila Bose.

Bose was a three-time MP of Jadavpur. In 1996, she won as a Congress candidate and then as a Trinamul candidate in 1998 and 1999. She was also the chairperson of the Netaji Research Bureau.

On February 16, Bose was admitted to the private hospital off EM Bypass with irregular heartbeats. Later her condition worsened. At around 10.20 am on Saturday Bose breathed her last.

The body was brought to Netaji Bhavan on Elgin Road from the hospital later.

Ms Banerjee tweeted, “I lost someone respected, loved & admired by me. Saddened & shocked to hear about the demise of Krishna Bose, ex-TMC MP & wife of freedom fighter Dr Sisir Bose.”

She added, “Being a part of Netaji’s family, she was a revered social reformer, renowned poet & a courageous educationalist. Krishna di was a mother to her son’s Sumantra & Sugata, daughter Sarmila as well as the whole Trinamul family. Her immense contribution to Indian society & Bengali culture will be revered for times to come.”

“She was a renowned parliamentarian, a noble soul. Her three terms in Lok Sabha were significant. Her role as Chairman of the External Affairs Committee in Parliament was greatly appreciated. Her passing is a huge loss to society. She was a great source of inspiration to all of us. May her soul rest in peace,” he said.

Born on December 26 in 1930 to constitutional studies specialist Charu Chandra Chaudhuri in Dacca (now Dhaka in Bangladesh), Bose taught in City College in Kolkata for around 40 years before becoming its principal. In 1955, she got married to Sisir Kumar Bose who had helped his uncle Subhas Chandra in his 'Great Escape' from India in 1941.