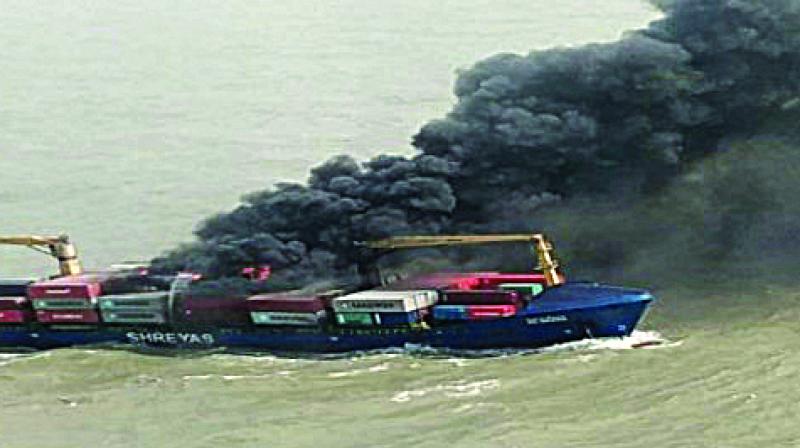 This was informed by the ICG Inspector General (North East) Kuldip Singh Sheoran in a statement on Friday.

Kolkata: SMIT Salvage, which has been carrying out the salvage operation in fire-hit cargo ship: MV SSL Kolkata in the Bay of Bengal with the help of the Indian Coast Guard (ICG), is sourcing equipment, which will be used for oil removal in the container vessel.

This was informed by the ICG Inspector General (North East) Kuldip Singh Sheoran in a statement on Friday.

He elaborated that the Dornier aircraft of the ICG is maintaining watch in the area around the stranded vessel and the ICG ship are monitoring the situation closely.

After inspecting the merchant ship the salvage team confirmed that there was no fire as checked by thermal imaging cameras but smouldering is there.

Mr Sheoran explained that towing ropes with cutting equipment and other special equipment have been arranged by the salvours.

The fishing trawlers are kept stand-by at Farzerganj to assist salvage team in salvage operations, he said adding that team of salvage master and architecht are formlating the salvage plan. Lewek Harrier from Signapore will join operation with Lewek Altair on June 24.

Tug Amrita is also likely to join the operation soon. No oil spill has been observed around the vessel. Sorties to assess the situation of SSL Kolkata by the ICG air and surface units are going to continue till derelict shapes safe an final course, Mr Sheoran mentioned.