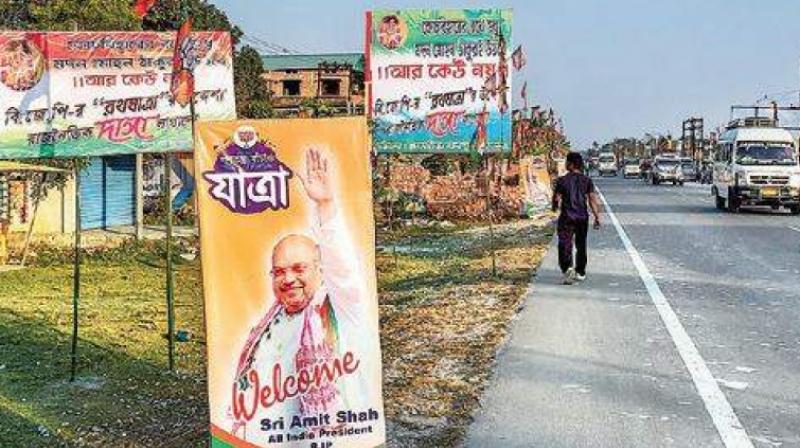 The rallies were supposed to be launched from three different locations in the state, crisscrossing it before converging in Kolkata. (Photo: PTI)

Kolkata: The Bharatiya Janata Party and the Trinamul Congress seem to headed for another confrontation, this time in the Supreme Court.

The BJP said on Saturday that it is planning to move the Supreme Court next week for permission to take out its rath yatras in West Bengal, and that it will file a petition before the vacation bench. The announcement came a day after the Calcutta high court asked the BJP to defer its three “Save Democracy” yatras in the state.

Sources said that the Mamata Banerjee government, having anticipated this move, is not sitting idle. It too is gearing up to put up a strong legal case opposing the yatras.

Sources indicated that the BJP may rope in heavyweight legal eagles for its battle in Supreme Court in view of the possibility of Congress MP Abhishek Manu Singhvi appearing for the Trinamul Congress government.

The BJP’s rallies were supposed to be launched from three different locations in the state, crisscrossing it before converging in Kolkata. The administration had earlier denied permission for the rallies, saying they could trigger communal clashes in the state.

The BJP filed a plea and received the green signal from a single-judge bench on Thursday. Justice Tapabrata Chakraborty said that the court failed to see the reasoning behind the government’s argument and instead asked it to ensure that no breach of law and order occurs during the event.

A jubilant BJP welcomed the verdict and planned to launch the first of its three yatras from Birbhum district on Saturday.

But the Mamata Banerjee government appealed against the order and on Friday, a division bench of the Calcutta high court of Chief Justice Debasish Kar Gupta and Justice Shampa Sarkar quashed Justice Chakraborty’s order allowing the BJP’s rath yatra under certain conditions. The two-judge bench observed that Justice Chakraborty should have examined intelligence reports from the districts, submitted to the court by the state government, before giving its order.

The high court also directed the single bench to hear the matter quickly while considering if there are grounds to allow the BJP’s rath yatras.

Sources disclosed that the state BJP leaders got in touch with party president Amit Shah after the setback at the division bench. And it was Mr Shah who guided them to move the top court.

One reason cited by party insiders for moving the apex court is that the vacation bench can take up its plea immediately.